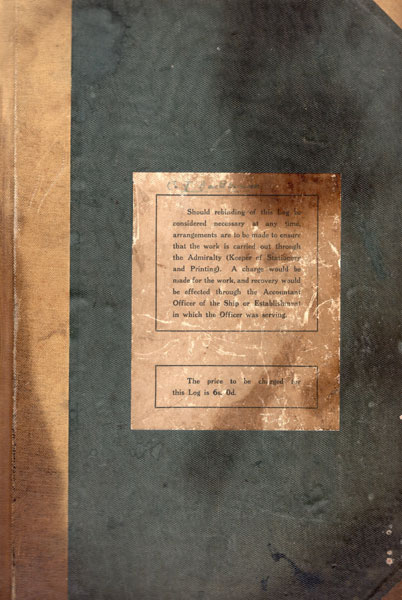 Lengthy Journal Kept By Officer C. J. Backhouse Describing His Service Aboard The Hms Nelson And Hms Eskimo During Wwii

First edition. Small folio journal 13 1/4" x 8 3/4" bound in two-tone tan and green/gray cloth. 203 pp. Contains 203 pages of entries composed in ink plus four typed loose sheets with a lengthy account of 'Operation Husky' filling both the rectos and versos. Accompanying the entries in this large journal are numerous accomplished maps, diagrams of convoy formations and battle screens, and drawings of battleships, rescue launches, and motor boats tipped in between the pages. Housed in a custom cloth clam-shell box. This journal has suffered heavy soiling from oil, which we believe was caused during 'Operation Husky' when the HMS Eskimo was struck by a German bomb, penetrating its fuel oil tanks and causing a massive leak, killing many. This event is described by Backhouse in the typed sheets included with the journal. While the soiling has darkened the pages and left an oily aroma to linger, nearly all entries are legible. Backhouse's journal is one of the most detailed and densely written documents kept by an active participant in WWII we have encountered. In addition to providing a running analyses of the fortunes of both the Allies and the Axis powers, he reveals details of 'Operation Pedestal' when the Allies sent a heavily armed convoy to relieve the defenders on Malta who were suffering from starvation due to a blockade incurred by the Germans and Italians. He records the Nelson's attempt to land troops onto the shores of North Africa and provide heavy artillery cover. He writes of the Allies attempt to starve out German holdouts on the Tunisian island of Zembra, who eventually try to swim out to the mainland before they are picked up by the British. In exchange for food, the prisoners provide much needed tactical information, and describe their fear of being placed in an American POW camp as opposed to one run by the British. His final description on the loose pages in back detail the fury of 'Operation Husky' when the Eskimo is hit by a German air raid, causing oil to spew all over the deck. He witnesses men covered with thick oil, catch fire, and burn alive. Several, in a mad scramble, jump overboard to put out the flames. In addition, the illustrations and maps he draws, and tips in between the pages, are remarkably well done and add an extra layer of context for his exhaustive narrative.

The Ballad Of The Berry Boys
D. HARPER SIMMS

Reports Of The Naval Engagements On The Mississippi …
WELLES, GIDEON [SECRETARY OF THE NAVY]