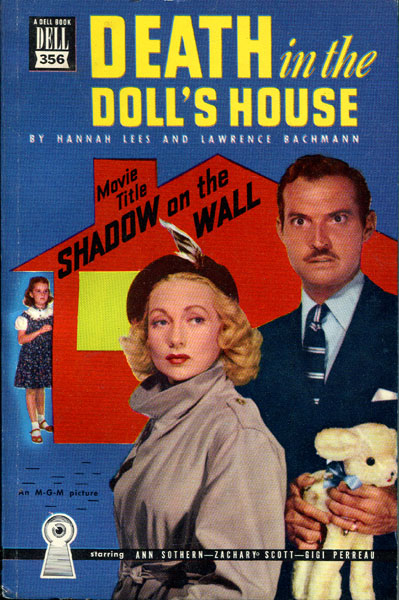 Death In The Doll's House. The Novel On Which Metro-Goldwyn-Mayer Based The Popular Film Shadow On The Wall ...

by Hannah And Lawrence Bachmann Lees

First Dell Mapback edition, Dell No. 356. 12mo. 240 pp. Color pictorial wrappers with front cover showing Ann Sothern, Zachary Scott, and Gigi Perreau from MGM Shadow on the Wall and with rear wrapper showing a color map of Starling House. 240 pp. Celia Starling was a dark-haired beauty who attracted men. Randall, her husband, was jealous. His jealousy drives him to drink and who knows what a drunken jealous man might do if pushed far enough? One evening Blacker Farragon, doctor and friend to the Randall is summoned by Celia, who is afraid of Randall and what he might do in his drunken state. Eventually Blacker leaves the house, convinced that Celia is making mountains out of molehills. Shortly after arriving home Blacker received a phone call telling him that Celia is dead from a gunshot and Randall is in bad shape from an apparently self-inflicted wound. The police are ready to accept the obvious ... that Starling's jealousy finally got the better of him and he killed his wife and then attempted to commit suicide once he realized what he'd done. But Blacker doesn't believe it. He's known Ranny far too long and knows that his friend isn't a murderer. But if Randall didn't do it, then who did? MGM film stars a young Nancy Davis (later Nancy Reagan), Ann Sothern, Zachary Scott, Gigi Perreau, and was directed by Pat Jackson. Fine, bright copy.

The Affair Of The Scarlet Crab.
by Clifford. Knight

All Our Tomorrows.
by Ted. Allbeury

Just Another Day In Paradise.
by A. E. Maxwell