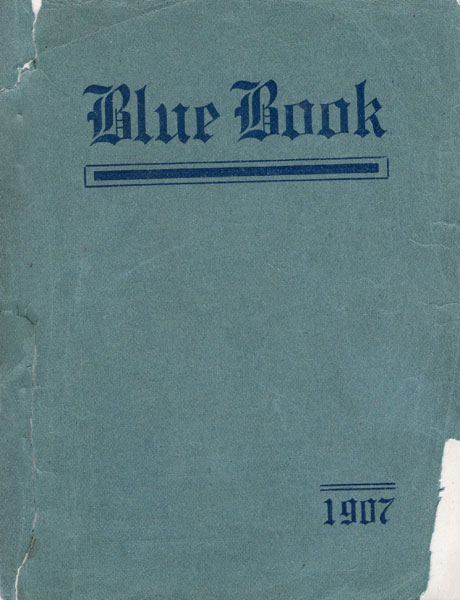 13.6 x 10.5 cm light blue wrappers with title printed in dark blue, n. p. (104 pp.), text printed in red and black ink, illustrated plus nine full-page photographs, advertisements. The rare eighth edition of the series of guides to the bawdy houses and prostitutes of New Orleans, issued between 1900 and 1915, and known collectively as the "Blue Books" of Storyville. This eighth edition is so stated on p.[7], and is one of only two editions of the Blue Book to print its edition number and year of publication. Before the First World War, the red-light district of New Orleans operated in a very public way, until the U.S. government suppressed it at the time of the American entrance into the war. This guide lists women by address and contains advertisements for houses as well. They include lists of burlesque houses, names of landladies, and names of prominent women in the trade. The prostitutes are often identified by race, most commonly white, colored, and octoroon. In this edition, though octoroons are listed as a category on the page of instructions for using the BLUE BOOK, no octoroon women are actually identified as such in the text. According to Arceneaux, "Overall, there are 654 women ... 445 white, of whom 194 are madams; and 209 colored, of whom 95 are madams." The earliest such guide appeared about 1896, and they were produced almost annually from 1900 to 1915. During this period, all of the guides issued under the title BLUE BOOK were the product of Billy Struve, allegedly from the second floor of Lulu White's saloon at the corner of Basin Street and Bienville (though that story is likely apocryphal). More likely, Struve assembled the BLUE BOOKS from his management offices at Anderson's (a saloon owned by the "Mayor of Storyville," Tom Anderson, located at the corner of Basin and Iberville) where, according to the city directories, he also resided for most of the Storyville years. Five advertisements appear in this edition which mention Tom Anderson by name, either for one of his businesses or liquor endorsements made by him. According to Arceneaux, in this edition, there is "a design element not found in any other BLUE BOOK. A striking red frame showing two laughing jesters on sticks, facing each other across a glowing red lamp, appears on each of the directory pages." This is also apparently the only edition in which the word "Cribites" is used to describe the much smaller rooms created by partitioning off rooms in some of the larger brothels, "creating crib-like spaces and rented to individual prostitutes." The nine photographs in this edition all feature interiors of Miss Arlington’s establishment at 225 Basin Street. Owing to their content and heavy use, all BLUE BOOK guides are extremely rare. This is the earliest copy ever handled by this firm. Covers lightly chipped along the fore-edges. One short and one a bit longer tear on front cover along the spine, and minor chipping at the spine ends. Internally clean and tight and very serviceable. Overall a very good copy. Housed in a custom made quarter leather and cloth, clamshell case with raised bands and titles stamped in gilt on the spine.