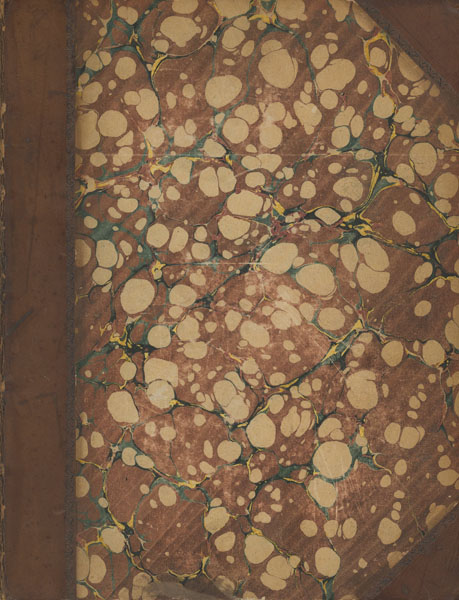 Exploratory Travels Through The Western Territories Of North America: Comprising A Voyage From St. Louis, On The Mississippi, To The Source Of That River, And A Journey Through The Interior Of Louisiana, And The North-Eastern Provinces Of New Spain, Performed In The Years, 1805, 1806, 1807, By Order Of The Government Of The United States.

Other works by PIKE, ZEBULON MONTGOMERY

First English edition. Substantially reorganized from the 1810 Philadelphia edition. 4to. Quarter polished brown calf and marbled paper over boards, marbled front and rear endpapers, all edges marbled, [iii] - xx, 436 pp., two engraved maps [one folding], footnotes, appendix. Pike's personal journal of the earliest U.S. government expedition to the southwest, including one of the first descriptions of Texas in English. Pike explored the headwaters of the Arkansas and Red Rivers, and reported on the Spanish settlements in New Mexico, as well as his account of his expedition to the upper Mississippi in Minnesota. The maps are of the Mississippi and New Mexico and were "the first of this entire region to display knowledge derived from actual exploration [and are] of outstanding historic interest." (Wheat, Trans-Mississippi West Maps, II, pp. 20-21). "The Louisiana Purchase was one of Thomas Jefferson's crowning achievements, and in the following four years he commissioned a number of expeditions to explore the largely unknown territory. In 1804 Lewis and Clark ventured westward from St. Louis; Sibley, Dunbar and Freeman explored the Spanish border region in Texas; and in 1806 Pike went to explore the southernmost border region north of New Spain. His orders were to explore the Arkansas and Red Rivers, but by February of 1807 he had reached the upper reaches of the Rio Grande having missed the Red River entirely: "Spanish authorities learned of his presence and sent a force to arrest him and his men. They were taken to Santa Fe and then sent on to Chihuahua. Pike's maps and papers were confiscated, but he managed to retain his diary and journals by secreting them in the gun barrels of his men. Apparently he was able to convince the Spaniards that he had entered New Spain by accident, as he was escorted by armed guard through Texas via San Antonio to the Sabine, where he was released. He arrived at Natchioches in June, 1807, having thus had the opportunity to examine New Mexico and Texas in some detail, at the expense of the Spanish government." (Jenkins). "In the hierarchy of significant westward expeditions, that of Lieutenant Zebulon Montgomery Pike (1779-1813) ranks right below that of Lewis and Clark. While his was not the first official reconnaissance of the west, he provided 'the earliest official geographical image of the trans-Mississippi West'. Pike's map and journal provided the first authentic information about the Upper Mississippi. On the Conejos River, an effluent of the Rio Grande, well into Spanish territory, Pike boldly constructed a fort. It was at this fort that he was arrested and taken first to Santa Fe and then to Chihuahua for a meeting with Don Nemesio Salcedo, the governor of New Spain. The authorities confiscated, among other documents, a manuscript map of the Santa Fe Trail. While in custody of the Spanish, Pike learned 'just how many and what kind of troops the Spanish had on hand to defend the northern provinces,' according to William Goetzmann, 'and he was well informed on the character and personalities of all the Spanish military leaders. No more successful espionage operation has ever been conducted in recorded American history.' Pike returned from captivity without his sketch maps, making the creation of his own map more difficult. He had managed to smuggle traverse tables in the rifle barrels that he and his men were allowed to take with them after being released. These tables enabled him to reconstruct parts of the upper Arkansas, and to his credit, his map is the first to accurately delineate the Arkansas and its tributaries. Nevertheless, large sections of 'A Chart of the Internal Part of Louisiana' (1810), were based on Alexander von Humboldt's map. It is paradoxical that Pike, who had actually explored the internal part of Louisiana, relied on the cartography of Humboldt, who had never been there" (Cohen). "Pike has been suspected of complicity with the Aaron Burr conspiracy to establish an empire in the Southwest, carved from the Spanish provinces of northern Mexico and the western United States, but no firm evidence supports those charges. He remained, however, outspoken in his resistance to the democratization of the army during the Thomas Jefferson administration. Pike published the journals of his explorations in 1810, supplemented with his correspondence with General Wilkinson, his speeches to the Indians, and detailed descriptions of the land through which he traveled, as An Account of Expeditions to the Sources of the Mississippi and through the Western Parts of Louisiana. Appearing as it did, four years before the publication of the journals of Lewis and Clark, Pike's book provided the American public with its first written description of the trans-Mississippi West. He was killed in action at the storming of York, (now Toronto), Canada, on April 27, 1813, when the enemies' powder magazine exploded" (Handbook of Texas Online). The publication of Pike's reports of the area now occupied by Texas, Arkansas and New Mexico encountered similar difficulties to those of Lewis and Clark of their expedition, and did not appear in print until three years after Pike's return. However, they were well received and the favorable reports of Texas as "one of the richest, most prolific, and best watered countries in North America" did much to encourage further exploration and expansion." Covers lightly rubbed, leather label on the spine is chipped with the loss of four letters, former owner's neat bookplate on front pastedown sheet, half title not preserved, else a very good, clean, sound copy.

Letter Of The Secretary Of War Communicating, In …
WILLIAM W BELKNAP