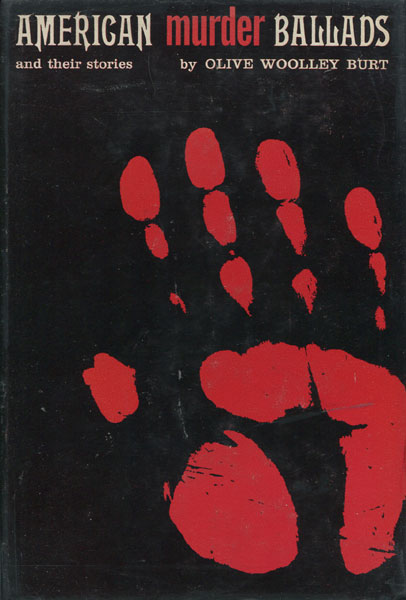 American Murder Ballads And Their Stories.

First edition. 8vo. Inscribed by the author, "To Harriet & Vic, With my best wishes, Olive W. Burt." Laid-in is a copy of a poem written by the author about her trip around the world. Decorated paper over boards, frontis., xiii [3], 272 pp., acknowledgments, foreword, illustrated, index. Quite possibly the only book of its kind, here told for the first time is the story of American murder balladry. The folklore and songs of all kinds of people are told in ballad form, such as wronged husbands, victims of unrequited love, reluctant suitors, thieves, oppressed union members, outlaws, and self-appointed administrators of justice. The blood-and-thunder days of the Old West live again in the ballads celebrating bandit heroes, vigilante groups, and the fierce massacres of Indian and white man. Especially interesting are the many Mormon ballads, which lament the persecution of these people and the martyrdom of their leaders. "The songs the author has assembled for this book are by local minstrels and unknown poets; many have never been published before. Some of them describe world-famous crimes. Others tell of obscure murderers, like William Roundy from southern Utah, who shot his neighbor for taking more than his fair share from the common water supply, and V.P. Coolidge from Brighton, Maine, who lay in wait for Edward Matthews to murder him for his load of hay. He failed in this, but obtained a loan from his intended victim and then poisoned him." The author tells how she found each song and gives the details of the crime to which it relates. Carl Carmer says, "With this collection of crime ballads .... Mrs Burt has made a major contribution to Americana. Scholars will welcome it and so will the vast audience of Americans who delight in folk-song because of its originality, its music, and its humor." Very good in dust jacket with light professional restoration to spine ends, corners and extremities. A fascinating book.

The Hilliker Curse. My Pursuit Of Women.
JAMES ELLROY

One To Count Cadence.
JAMES CRUMLEY