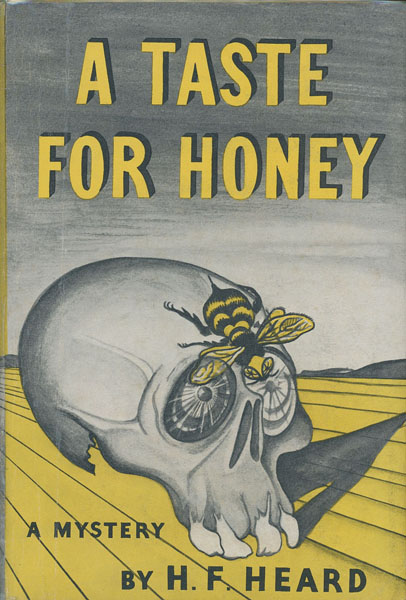 A Taste For Honey.

Other works by H. F. HEARD

First edition. Author's first mystery. A tiny tear to head of spine has been professionally repaired, else a fine bright copy in a bright and colorful dust jacket. Heard's first novel, whose protagonist, Mr. Mycroft, was styled as a latter-day Sherlock Holmes, praised by both Vincent Starrett and Boris Karloff at the time of publication. "The narrator, Sidney Silchester, has retired to a small English village, where he seeks only to be left alone to potter about in his garden and to indulge his taste for honey. The wife of the man from whom he gets his honey, Mrs. Heregrove, is killed by a swarm of their bees. Silchester meets and old and somewhat mysterious scientist/detective who calls himself Mr. Mycroft and who insists that Heregrove murdered his wife by breeding a new strain of "killer Italians" (bees, that is). Silchester scoffs at this idea, until he himself is attacked for no good reason by Heregrove's bees. Then he joins forces with Mycroft – or rather, wanders along in Mycroft's shadow while the old detective stalks Heregrove and metes out justice" (Pronzini & Muller, p.352). 20th Century Crime & Mystery Writers says, "It tells of the experiences of Mr. Mycroft (detective) and Mr. Silchester (narrator) against a criminal who "sends" bees with hypertrophied stinging apparatus. Set in the British countryside, ably characterized, with a leisurely pace, it is perhaps the finest novel-length pastiche of Sherlock Holmes---even though Holmes is not mentioned by name." Haycraft/Queen Cornerstone.

Dig Me A Grave.
JOHN SPAIN

So Wicked My Love
BRUNO FISCHER