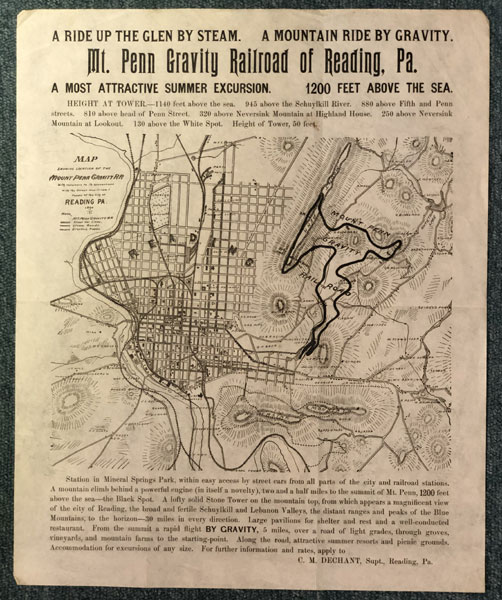 A Ride Up The Glen By Steam. A Mountain Ride By Gravity. Mt Penn Gravity Railroad At Reading, Pa. A Most Attractive Summer Excursion. 1200 Feet Above The Sea. Broadside

Other works by C. M. DECHANT

A fascinating broadside with map promoting trips by rail up Mount Penn, whose summit boasted scenic views and entertainment such as live music and dancing. This publication was issued during the railroad's first year of operation. Conceived in 1881 by a group of Reading citizens, the Mount Penn Gravity R.R. was constructed in 1889. The railway offered vacationers and sight-seekers a thrilling mountain ascent through the beautiful glen overlooking Mineral Spring Park; thence through the cool shade of Egelman's Park forest; and then finally—across Skyline Drive to the summit of Mount Penn, which offered breathtaking panoramic views, among other attractions. Incorporated here is a map entitled Map Showing Location of the Mount Penn Gravity R.R. with reference to its connections with the Street and Steam roads of the City of Reading PA. It depicts the city and surrounding hills and mountains, with relief shown by hachure, and shows in bold the route of the Gravity R.R. Various landowners are identified and a key at the upper left denotes street car lines, as well as electric and steam roads. Text below the map reads in part: "A mountain climb behind a powerful engine (in itself a novelty), two and a half miles to the summit of Mt. Penn, 1200 feet above the sea ... the Black Spot. A lofty solid Stone Tower on the mountain top, from which appears a magnificent view of the city of Reading, the broad and fertile Schuylkill and Lebanon Valleys, the distant ranges and peaks of the Blue Mountains, to the horizon ... 30 miles in every direction. Large pavilions for shelter and rest and a well-conducted restaurant. From the summit a rapid flight BY GRAVITY, 5 miles, over a road of light grades, through groves, vineyards, and mountain farms to the starting-point. Along the road, attractive summer resorts and picnic grounds." Provided above the map are figures for the height of the stone tower on the summit relative to the sea and various surrounding locations. Known as the Tower Hotel, the tower building included a magnificent stone pavilion constructed in 1890 where passengers enjoyed large dance floors with live music by notable groups such as the Germania, Ringgold, and Reading Symphony Orchestra. Also at the summit were bowling alleys, shuffle board, a billiard parlor, refreshments and a novelty stand, as well as picnic areas and forms of entertainment for children. Near the Tower Hotel was the Grand Schwartz's Summit House Hotel ... a luxury hotel erected in 1891. On 25 March 1890, the Gravity R.R. took its inaugural trip up Mt. Penn. A steam locomotive named "The Wm. Penn" powered the trip, reaching a speed of 15 mph. Over its thirty-three year run two tragic incidents occurred, in 1890 and 1891. The former saw a railcar plummet from the tracks ... resulting in five deaths and twenty injured. Notwithstanding these accidents, the Mount Penn R.R. continued to be Reading's main attraction, serving some 80,000 riders per season. However, despite its renown, it rarely made a profit. The company invested some $100,000.00 and was saddled with debt until 1898, when its line was electrified and it added six motorized cars which were less expensive to run. However, following the rise of the automobile and the '20s Prohibition Era, local resorts declined across the nation. In 1923 a terrible fire destroyed the Tower Hotel, and soon thereafter the Gravity railroad tracks were torn up and sold for scrap. Faint fold creases and minor to light wear at the extremities, else a very good copy, suitable for framing. WorldCat records just one copy, at the Library of Congress. REFERENCES: Crupi, Corrie. The Gravity Railroad at pagodaskyline.org

Memorial Of The Legislature Of Dakota, Asking For …
G.C MOODY