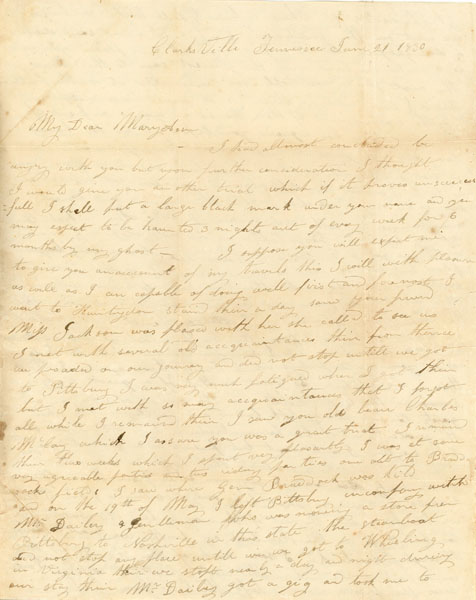 A fascinating 4-page letter written and sent from Tennessee in 1830. A very interesting letter giving a detailed report of people he knew in Pittsburgh and then going on to reference stops he made in Huntington, Pittsburgh, Wheeling, Cincinnati, and Louisville Falls. He travels partly by steamboat except where the water is too shallow where he travels by gig. In Pittsburgh he mentions going riding and seeing where General Braddock was killed. In Ohio he travels on the "National Turnpike" where he can cover a distance of 8 miles per hour with "the Greatest of ease to the horses" on a delightful road "as smooth as a floor." In Cincinnati he writes that this is the farthest west he has ever been and finds "every house has a green yard before it and the house being all new gives it such a neat appearance ..." He enjoys fresh strawberries and cream plus goes to a museum where he finds "a great many curiosities, real and artificial." The citizens of Cincinnati are "very kind and hospitable." On he travels to Louisville which he finds is not as neat as Cincinnati but more compactly built, but "without so much attention paid to order." "I never spent such a miserable time." "There is no solitude so great as that of a great city" Then it was down through Kentucky. "The lower part of Kentucky is the most beautiful country I ever saw. The forests are very lofty and the trees grow all one height. A great place for hunting." He travels 100 miles through the Barins. No timber growing very high grass. "No person can account correctly for its being. He speculates it may have once been a large body of water. "The climate is much more pleasant than Pennsylvania, early spring they eat apples a lot." He closes with a number of critical comments on southerners. "I find the ladies of these southern states very intelligent and agreeable but the gentlemen afford a poor subject for comment." "For my part I consider them a peculiar race of being affording neither amusement nor pleasure ... they indulge in every species of vice." "Everything sacred is profaned. Going to church is looked at for amusement, as a frolic and everything like religion is ridiculed." "I think there is the most awful state of society I ever saw." He lives four miles from town and the only pleasure he gets is from receiving letter and he thinks he will leave Clarksville in the spring. Writing is legible but beginning to fade, light wear to a few fold creases, the self-folded letter has minimal loss where the wax seal was attached. Overall a good letter.

The Memoirs Of Charles Henry Veil. A Soldier's …
VIOLA, HERMAN J. [EDITED AND WITH AN INTRODUCTION BY]