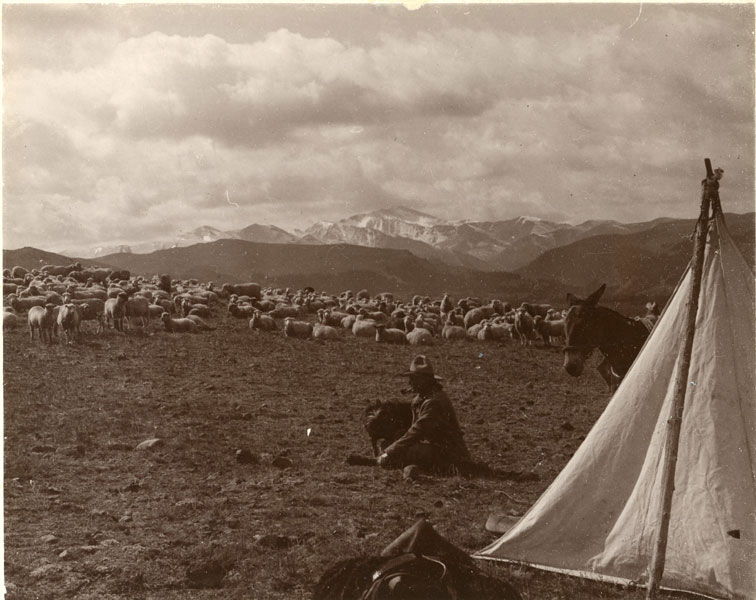 7 3/4" x 9 3/4" evocative photograph of a shepherd on the Z-T Ranch in Pitchfork, Wyoming sitting on the ground outside of his tent, smoking a pipe with his dog beside him. In the background is a mountain range and sheep are grazing. On the verso are the stamped words: "Photograph Copyright by Charles J. Belden Z-T Ranch, Pitchfork, Wyoming." Born in San Francisco, Charles J. Belden (1887-1966) was a photographer and rancher who achieved recognition for his captivating photographs of the American West, especially Wyoming. Through his first wife Frances Phelps, Belden landed at the Pitchfork Dude Ranch where he worked as a cowboy -- a 250,000 - acre ranch situated at the base of the Absaroka Mountains near Meeteetse, Wyoming. Against this sublime backdrop, he photographed cowboys, cattle and daily life on the ranch from circa 1914 to 1940 -- and found acclaim when his photographs were published in National Geographic and numerous other U. S. magazines. A master of composition, light and angles, his technical abilities were matched by his intimate, first-hand knowledge of his subject matter. He once remarked that, "If a picture does not tell a story, it is not worth taking." Through experimenting with innovative methods of exposure, developing and printing, Belden honed his artistry to become one of the photographers to document the vanishing frontier cattle ranch. In the late 1920's he was involved in raising antelopes and sending them to zoos around the world. Known for wearing beaver hats, Stetson would name their model "The Belden" after him. In 1940, Charles and Frances divorced; he left the ranch and moved to Florida with a new wife. There, in 1966, he died of a self-inflicted gunshot wound. Light wear to top margin, else a totally strong image.

An Economic Study Of A Typical Ranching Area …
by Bonney. Youngblood

Flute Of The Smoking Mirror. A Portrait Of …
by Frances Gillmor

The Red River Valley, Then And Now. Stories …
by A.W. Neville