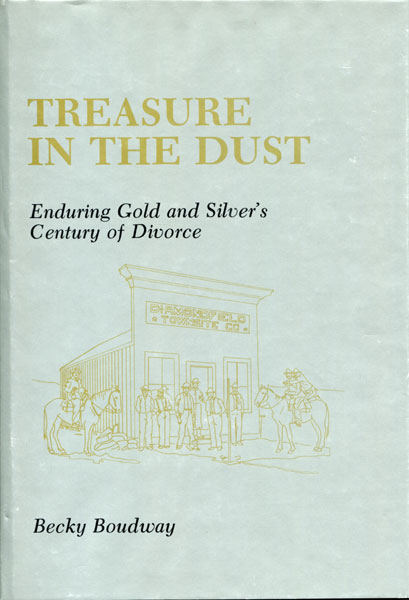 Treasure In The Dust, Enduring Gold And Silver's Century Of Divorce

First edition. 8vo. Generic inscription on the half title page by the author. Maroon cloth, decorations and titles stamped in gold gilt on the front cover and spine, maps on front and rear endpapers, xvi [2], 177 pp., introduction, illustrated from photographs, endnotes, bibliography, index. Two typed letters on Mineral Economics Corporation letterhead dated in 1988, and signed by the author, sent to a Tucson bookseller. This is a mining history "touching upon the life of the Father of the Mining Laws, William Morris Stewart; of W. C. Ralston, the California banker who helped finance the Comstock; of Adolph Sutro, who went against Comstock bosses with his magnificent tunnel; of the geologists Waldemar Lindgren and S. F. Emmons, who wrote some of the lasting theories of ore deposition; of Clarence King, the daring young mining engineer who led the U. S. survey of western territories along the 40th parallel; of George Wingfield, the Nevada financier whose banks and investments in mining in Nevada were rejected by U. S. banking aid during the depression; of Herbert Hoover, mining engineer and U. S. president; and of Key Pittman, Nevada's U. S. senator and a chief advisor to Franklin Roosevelt on metal standards for money." Gold and silver mines and mining in California and Nevada. Fine in dust jacket.

Islands In The Desert. A History Of The …
by John P. Wilson