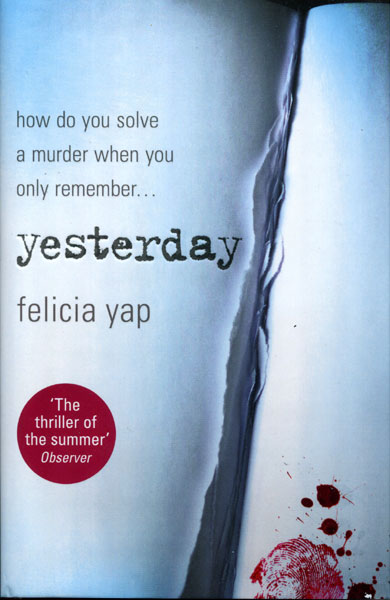 Other works by FELICIA YAP

First edition. Signed by the author. Author's first novel. As new, unread copy in dust jacket. Set in idyllic Cambridge, England, Mark Henry Evans, a successful novelist and aspiring politician, lives in a spacious mansion with his pretty blonde wife, Claire. In this alternative reality, the world is divided into “Duos," people who can remember things for two days, and “Monos," those who can only recall events for one day. In a society entirely dependent on technology, the human brain essentially crashes every 24 or 48 hours, and needs to be rebooted. People do retain basic facts about themselves ... names, spouses, jobs, addresses ... so that society can at least function. But most short-term memories are stored in iDiaries and every night responsible citizens update that day’s details into their iDiaries, which the authorities may or may not be keeping under surveillance. The next morning, the world’s citizens reach for the iDiary on their kitchen counters, to catch up with where they left off with their lives. Claire Evans, who knows she has been trapped at home in a sobbing, hysterical state for 24 hours, although she cannot figure out the reason, only that it was “something nightmarish”. She did not record it in her iDiary, so the details of that trauma are gone from her mind forever. Because her husband is a "Duo," he knows the reason ... but he’s not telling. The morning news reports that Sophia Alyssa Ayling was found drowned near the couple's home and soon enough the police are questioning Mark about his relationship to the mysterious murdered blonde. In the book's prologue, set two years before the murder, Sophia describes herself as a once-plain girl, with “a flat chest and protruding ears,” who spent 17 years in an insane asylum. Now that she is free and rich, she plans on transforming herself into a seductress and murderer who will seek revenge on her rivals. Sophia thinks she is the only known person on earth to have a full memory, meaning she feels she can literally get away with murder .... but, is she?