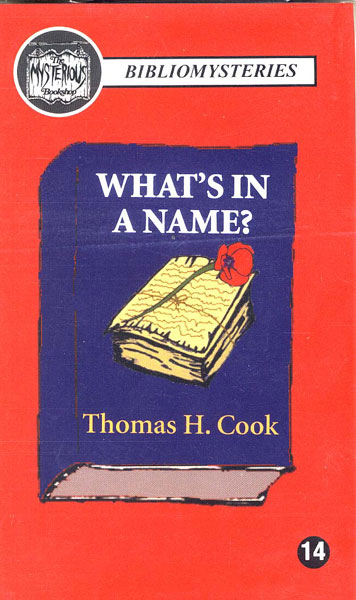 What's In A Name?

Other works by THOMAS H. COOK

First edition. Limited edition of 100 copies issued in cloth, numbered and signed by the author. Fine in dust jacket. Fifty years after the signing of the Armistice Treaty, amateur historian and rare book collector Franklin Altman’s native city of Berlin stands in dilapidated contrast to the Manhattan of the victorious United States.A series of financial and familial blessings post WWI allowed him the luxury of retreat from his native country to America, where he changed his name from Ziegfried to Altman and thus secured a position among New York’s intellectuals. On the evening of November 11th, 1968, a talk by Altman in honor of the anniversary of the Armistice Treaty takes a dark turn upon the haunting arrival of a classmate from his past. It becomes clear as the two men discuss their lives after the Realschule that they are two sides of the same coin: both born and raised in Germany with a melancholy adoration of the homeland, but whereas Altman’s role in the war elevated his position, his comrade’s life was destroyed on the faceless, mechanized battlefields. This strange encounter leaves Altman in possession of the man’s personal manuscript, his mysterious “life’s work,” whose contents could have changed the course of history. Book 14 in the Bibliomystery series published by The Mysterious Bookshop.

Time Is A Killer
MICHEL BUSSI