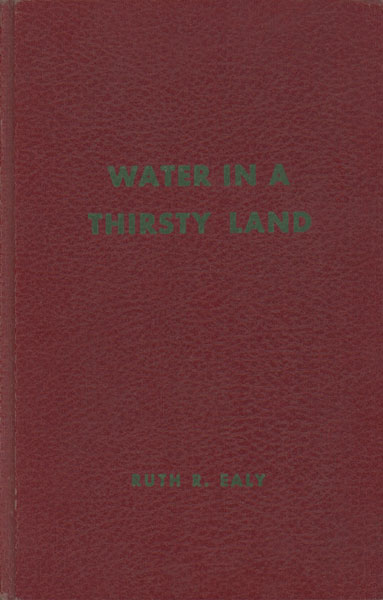 Water In A Thirsty Land.

Other works by RUTH R. EALY

First edition. 8vo. Red cloth, [5], 243 pp., preface, introduction, illustrated from photographs. Author's father, Dr. T. F. Ealy, a medical missionary, arrived in Lincoln in time to officiate at John Henry Tunstall's funeral. Much on the Lincoln County War, information of the burning of McSween's home, new material on Billy the Kid, and with information of the cattle industry in New Mexico. An unusual copy that bears the author's inked signature twice on the front free fly leaf and a small newsprint copy of her obituary is affixed to the front pastedown sheet. Laid-in is a post card dated 4-2-56 from Texas bookseller Bill Morrison with a handwritten note advising the customer that he could not get the 20 copies of this title he had on order, but he would fill the order when the copies arrived. Also laid-in is a copy of a typed letter of 1976 from Robert Mullin to Bob (McCubbin) that discusses Lincoln County, John Wesley Hardin, and the original Billy the Kid tintype. This copy at one time belonged to Bob McCubbin and he says further in another letter to a bookseller that there were only 40 copies printed. Jeff Dykes' Rare Western Outlaw Books says that 100 copies were printed with only 33 copies being for sale. Dykes provides additional information about the book. One of 100 copies (33 for sale) with the fore-edges lightly rubbed in very good condition of a rare book. Housed in a quarter leather and cloth clamshell case with raised bands and titles stamped in gilt on the spine.

Cryin' For Daylight. A Ranching Culture In The …
LOUISE S. O'CONNOR