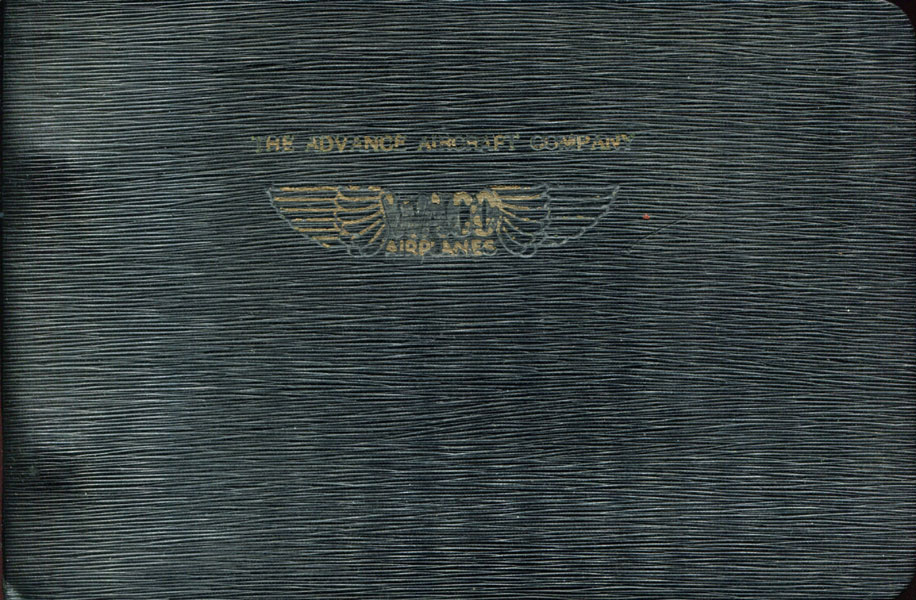 Other works by THE ADVANCE AIRCRAFT COMPANY, TROY, OHIO

A wonderful aviation trade catalog with 11 linen-mounted captioned photographs of in-flight Waco aircraft. Photos are 4 7/8" x 6 3/4" and contained in a black cloth dual screw-post binder with above titled gilt stamped on the front. The gilt lettering on the front cover is a bit faded, the photos are very clear and sharp. Overall in very good condition. This aviation photo album was a salesman’s book to show potential clients the diverse Waco aircraft in action. Ten of the eleven photos are captioned, i.e. A Close-up of the Trans-Continental Race Winner; Sport WACO Trans-Continental Race Team; The Sport Waco in Inverted Flight; A Flyaway Delivery of Three OX-5 WACO and one Whirlwind WACO; A Special Whirlwind WACO made to the Order of Mr. T. Higbee Embry, of Cincinnati; etc. Several companies operated under the Waco name, with the first company being the Weaver Aircraft Company founded by George E. Weaver, Clayton Bruckner and Elwood Junkin in 1920 in Lorain and Medina, Ohio. When Weaver left it took on the name of the Advanced Aircraft Company based in Troy. That name was followed by the Advanced Aircraft Company based in Troy, Ohio and finally to Waco Aircraft Company sometime in 1928/1929 in tribute to the Waco air field near Troy. The plane became very successful due to its reliability and became the choice of traveling businessmen, postal services and explorers, especially after the company in 1930 began to produce closed-cabin models in addition to their open cockpit biplanes. In fact there were more WACO plans registered between the wars than any other aircraft made by competitive companies. During World War II, Waco produced large numbers of military gliders for the RAF and US Army Air Forces for airborne operations, especially during the Normandy Invasion and Operation Market Garden. The Waco CG-4 was the most numerous of their glider designs to be produced. At the same time Waco produced over 600 of its UPF-7 open biplanes and 21 VKS-7F cabin biplanes for the Civilian Pilot Training program, which supplemented the output of the military training establishments. Forty-two privately owned models of sixteen types were impressed into service as light transports and utility aircraft with the USAAF under the common designation C-72/UC-72. After the war, in 1947, when the anticipated boom in aviation failed to develop, Waco went out of business. (Source: Wikipedia)