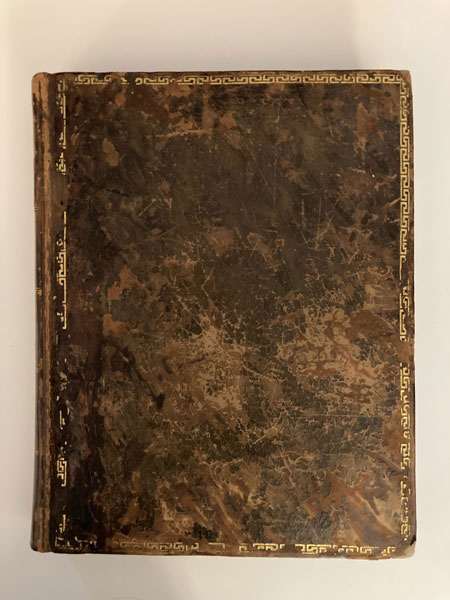 Voyages From Montreal, On The River St. Laurence, Through The Continent Of North America, To The Frozen And Pacific Oceans: In The Years 1789 And 1793. With A Preliminary Account Of The Rise, Progress, And Present State Of The Fur Trade Of That Country. Illustrated With Maps.

Other works by ALEXANDER MACKENZIE

First edition. Full Leather, early 19th century binding, decorative endpapers, viii, cxxxii, 412,[2]pp. plus 3 folding maps, half-title, frontispiece portrait. Errata. A classic of North American exploration; describes the extraordinary travels of Alexander Mackenzie in northwest America in 1789, when he discovered the Mackenzie River, and in 1793, when he crossed the continent to the Pacific. "Mackenzie’s expedition departed Fort Chippewyan in northern Alberta on October 10, 1792, and wintered at a remote trading post near the modern town of Peace River. Leaving there on May 9, 1793, with five companions and two Indian guides, they reached the Fraser River in British Columbia on June 18. Taking this south past present-day Prince George, they followed its tributary known today as West Road River and took overland trails through present-day Tweedsmuir Provincial Park to Bella Coola. From here they descended the Bentinck Arm of the Dean Channel to the Pacific, which they reached July 21, 1793, midway between the north end of Vancouver Island and the modern boundary of Alaska and British Columbia. They began the return trip two days later and reached Fort Chipewyan again on August 24, 1793, having crossed overland to the Pacific more than a decade before Lewis and Clark would." "First crossing of the continent from ocean to ocean by a white man. The narrative portion was prepared for publication by William Combe from Mackenzie's notes. The account of the fur trade--first ever published--is attributed to Roderick Mackenzie."---Wright Howes. "No writer upon the subject of Indian customs and peculiarities, has given us a more minute, careful and interesting relation of them, as indeed none were better fitted to do, by long experience among them as a fur trader."---Thomas W. Field. This work also contains rudimentary vocabularies of the Knisteneaux, Algonquin, Chipewyan, Nagailer, and Atnah Indian languages. "Mackenzie's narrative is of consummate importance in the literature of transcontinental travel. It is the first account of an ocean to ocean crossing of the North American continent. Mackenzie's account of the fur trade is of almost equal interest."---Everett Graff & Colton Storm. This copy is in exceptional condition. Offsetting of frontispiece to title page, else text block is clean with very light foxing on title-page and only a few pages. The 3 important, large folding maps are in Fine condition. This volume has been rebacked in leather in late 19th century to match early 19th century leather boards. Boards show aging to leather with cracking and scuffing. Gilt stamping around inner and outer perimeter of boards, as well as on spine, including title in gilt on morocco label. Early previous owners bookplate on inside of rear board. An important landmark work protected in clamshell case with title in gilt on morocco label on spine.

Portland And The Pacific Northwest
Portland Immigration Board