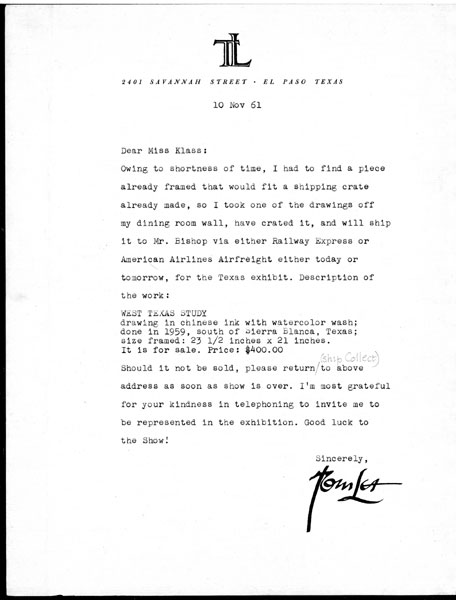 Other works by TOM LEA

8 1/2" x 11" handwritten letters on Lea's personal addressed stationery. Both letters addressed to: "Miss (Enid) Klass of New York City in two typed and signed letters. Late in 1961, Miss Klass and others were members of The Texas-Exes of New York and ex-students of the University of Texas at Austin. The group came up with the idea of a benefit for their group showcasing art primarily from professors in the Art Department of the University of Texas augmented by work by Texas artists from New York art galleries. They telephoned Tom Lea to see if he might submit one of his works. He very graciously answered in his letter of November 10, 1961 indicating he would take a framed drawing off his dining room wall to send and suggested a price of $400.00, the most expensive work in the exhibit. He did not come to New York for the exhibition. Lea's drawing was the highlight of the show and did sell and in his letter of November 30, 1961, he thanks Miss Klass for the check he had received and answers her inquiry about possibly having a Tom Lea exhibit the next year. Both letters are boldly signed "Tom Lea." Letters by Tom Lea are uncommon, and these two are in fine condition..