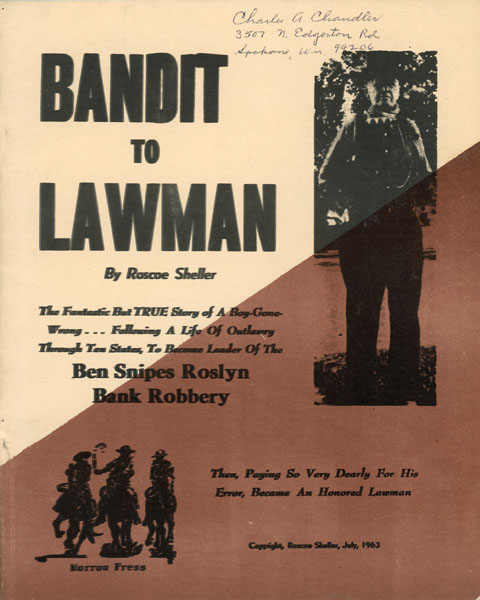 Bandit To Lawman: The Fantastic But True Story Of A Boy-Gone-Wrong ... Following A Life Of Outlawry Through Ten States, To Become Leader Of The Ben Snipes Roslyn Bank Robbery. Then Paying So Very Dearly For His Error, Became An Honored Lawman. (Cover Title)

Other works by ROSCOE SHELLER

First edition. 8vo. (21cm x 17cm). Staple-bound, pictorial wrappers, n. p. [20 pp]; illustrated, triple column. Effusively inscribed on frontispiece: "The Printing's Poor / th[e] Picture's Smeared / But the Story's Great," signed Roscoe Sheller, undated but apparently contemporary with publication. A brief biography of the noted western outlaw Ras Lewis, aka Matt Warner (d. 1938), including an account of his gang's robbery of the Snipes Bank in Roslyn, Washington in 1892. After a stint in prison, Lewis reformed, flipped sides, and devoted the rest of his life to bringing criminals to justice, first as a deputy sheriff, later as a judge in Utah. A much expanded edition was published in 1966. The current edition, which judging from the layout was reprinted from newspaper columns and is highly uncommon, with OCLC noting only six physical locations as of 2021. Former owner's neat inked name and address at top of front cover eles a clean, well cared for copy in near fine condition.