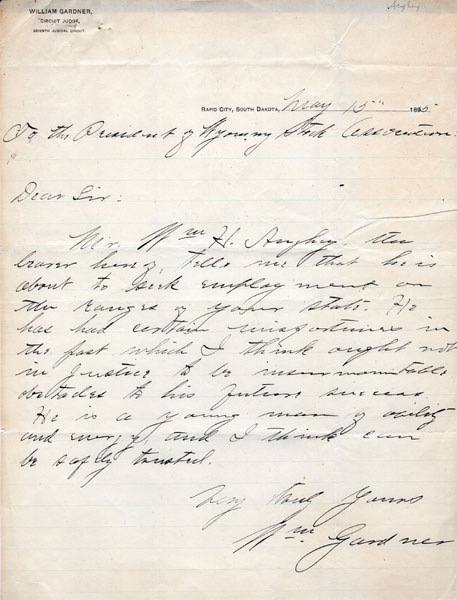 Two Manuscript Letters By And On Behalf Of Cowboy William Aughey, Seeking A Return To Employment On The Range In Wyoming

A fascinating pair of letters seeking to have cowboy William Aughey removed from a Wyoming employment blacklist in the May 1895. Both are addressed to the President of the Wyoming Stock Association; one is a personal appeal by Aughey himself, and the other is a letter of reference from a judge in South Dakota, where Aughey was apparently planning his return to Wyoming. Aughey's letter states, in part: "I have good reason to believe my name is on the blacklist. And desire to have it removed. So I can again seek honest & honorable employment, & do so in peace & security. I have paid dearly for all the wrong I ever done by serving two years at Sioux Falls Pen. In future, I want no maverick in mind [?], and desire only that no obstacles be put in my way of seeking honorable employment if I see fit to again engage in range work." A cover letter of reference from Rapid City, South Dakota, judge William Gardner accompanies Aughey's appeal, which reads: "Mr. Wm. H. Aughey, the bearer hereof, tells me that he is about to seek employment on the range of your state. He has had certain misfortunes in the past which I think ought not in justice to be insurmountable obstacles to his future success. He is a young man of ability and energy, and I think can safely be trusted." It may be inferred that Aughey was a participant in the Wyoming Range War as an alleged rustler, and was therefore blacklisted by the Wyoming Stock Growers Association as a part of their violent attempts to end the open range and crowd out smaller homesteaders. Two tantalizing documents on the closing of the range and the end of the frontier in 1890s Wyoming. Letters previously folded. Leaves pinned together at upper left corner, light wear and tanning, else very good copies.

Spokane And Portland. By Way Of The Canyons …
Soo Line

Official Souvenir And Programme Of The 39th National …
George W. Cook [Compiled By]