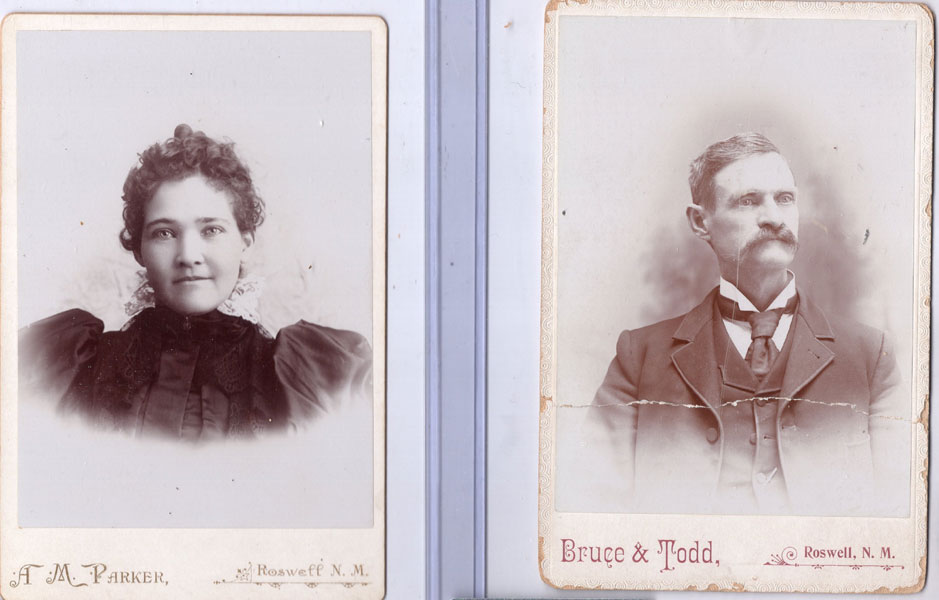 Two Cabinet Cards Of Jacob B. "Billy" Mathews And His Wife

Two card photographs: 1). Deputy J. B. "Billy" Mathews: 5 1/2" x 3 7/8," mounted to 6 1/2" x 6 1/4." Bruce & Todd, Roswell, N. M. photographer's imprint on lower front of card. Written in pencil on the verso are the words "JB Mathews, Roswell, N. M., 1898." Horizontal crease across the lower quarter portion of the photograph, else a very good image. 2). Mrs. J. B. Mathews (1867-1952) nee Doris Matilda (Bates) Mathews. 5 1/2" x 3 7/8," mounted to 6 1/2" x 4 1/4," A. M. Parker, Roswell, N. M. photographer's imprint on lower front of card. Written in pencil on verso are the words "Mrs. JB Mathews. A fine image. Robert McCubbin says: "Mathews was an important figure in the War, being the Deputy Sheriff in charge of the posse that killed Tunstall. He was walking on the street of Lincoln with Sheriff Brady when he was killed by Billy the Kid and the Regulators. Mathews may have wounded the Kid on that occasion." Jacob B. 'Billy' Mathews (1847- 1903) performed a leading role in what is arguably the most notorious chapter in the history of the American West: New Mexico's Lincoln County War of the 1870s. In carrying out orders from some of the primary figures in the conflict, namely J.J. 'Jimmy' Dolan or Sheriff William Brady, Mathews took part in practically all of the significant events of the war. Mathews' primary claim to fame is that he was the sheriff's chief deputy in command of the posse that shot down John Henry Tunstall on February 18, 1878, thereby igniting the most celebrated event in Lincoln County's history. In one aspect, he is unique among all of the participants in this conflict--he survived the war and lived to die a natural death of old age. After the Lincoln conflict, Mathews became a distinguished pioneer in the establishment of big-time cattle ranching in the Peasco Valley and farming in the Pecos Valley of Southeast New Mexico. Provenance: Robert G. McCubbin Collection.