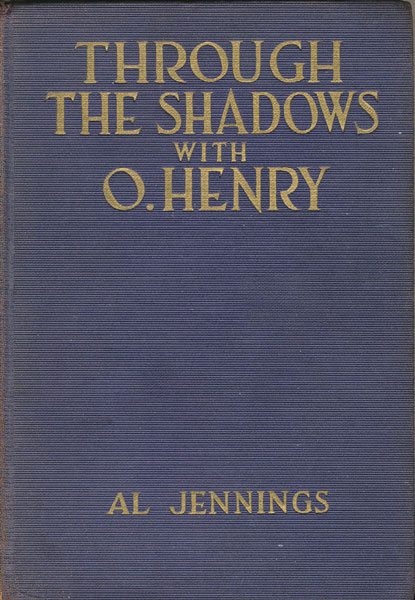 Through The Shadows With O. Henry

First edition. 8vo. Signed by Jennings on an extra leaf and bound-in after the title page. Colorfully decorated dark blue cloth, 320 pp., frontispiece, illustrated. The compelling story of Al Jennings and O. Henry (William Sidney Porter), who prior to his pen name was known as Bill Porter, and their shared experience doing time at the Ohio Penitentiary, with Mr. Porter going on to become one of American literature's best known and loved authors. Jennings was a genuine Old West outlaw, a convicted cattle rustler and train robber, who eventually became a film star playing himself during the silent movie period of the 1920s. Six Guns 1172 says, "This book deals mostly with Jenning's prison life and his friendship with O. Henry, who was confined in the same prison." Former owner's small name stamped on front fly leaf, else a very good copy with gold gilt titles bright on the front cover but faded on the spine. A nice copy, especially signed by Al Jennings.

Trouble Is Our Business
Declan. Burke [Edited By]

The Presidio. Bastion Of The Spanish Borderlands
by Max L. Moorhead