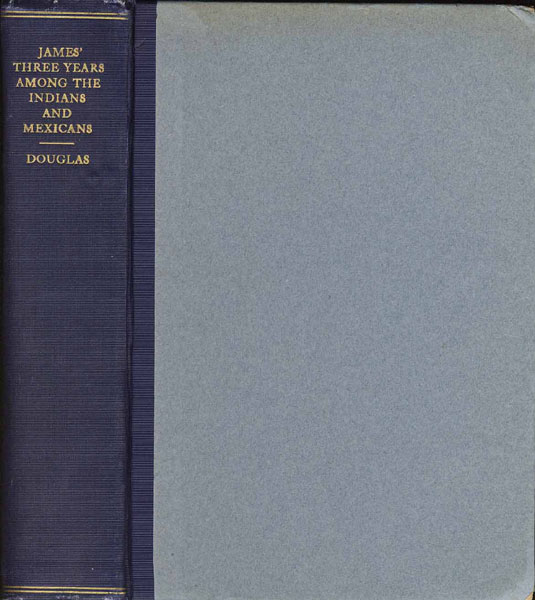 Three Years Among The Indians And Mexicans

First edition thus. 8vo. Limited to 365 copies, of which this is copy 61. Originally printed in 1846. Two-tone quarter cloth and boards, 316 [1] pp., preface, teg, introduction, frontispiece [portrait of Thomas James], illustrated, plates, portraits, appendix, bibliography, index. "One of the earliest narratives of the fur trade. It covers the author's experiences on the upper Missouri in 1809, and an expedition to Santa Fe in 1821, one of the earliest trips over the Santa Fe Trail. The 1846 first edition was written from James' dictation by Nathan Niles, who, resenting local newspaper criticism, destroyed nearly all copies (Howes)." "Depicts the travels of Thomas James through the gorges of the Rocky Mountains as a trapper and hunter. This work describes the relations between the American government and both the Mexican populations and the native tribes at the time. He sought to record the considerable information he received from his travels and first-hand experience to illustrate the Indian and Mexican character, customs and traditions. He detailed battles between tribes, wars between the states, and his narrow escapes from hostile tribes of the regions he traveled." Wagner/Camp/Becker 121 says "The first copy to become known in recent years was that of the Missouri Historical Society, which issued a reprint in 1916, edited by Walter B. Douglas." "Not only did General James participate in the beginning of the American Fur trade, but also he was one of the first to venture into New Mexico and to begin trade with Santa Fe, the story of which takes up much of his reminiscence." This copy is signed in pencil on the front fly leaf as "Property of Stella Drumm, St. Louis." Stella Drumm was archivist at the Missouri Historical Society and edited Susan Magoffin's Down The Santa Fe Trail....... Additionally there is a typed note laid-in and dated 4/13/77 to Dear Mr. Mintz over the signature of Elizabeth F. Dunlap. Mintz was Lannon W. Mintz who authored the bibliography The Trail which was of publications of the travelers on the Overland Trail to California, etc. during the years 1841-1864. Front pastedown sheet lightly cracked at the spine and minor wear to spine ends and corners, else a near fine, clean copy.

A History Of The Comstock Silver Lode & …
by William). De Quille, Dan. (Wright