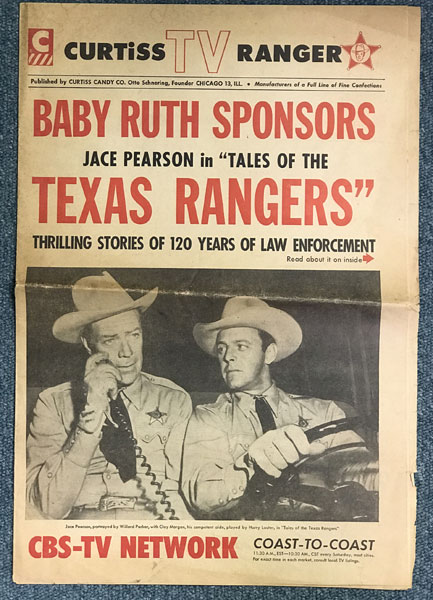 Other works by CURTISS CANDY COMPANY

First edition. 16 3/4" x 11 1/2" promotional, pictorial newspaper, unfolds to 16 3/4" x 22 3/4," and unfolds again to 33 1/2" x 22 3/4," illustrated, map. This is a promotional advertising piece for the Curtiss Candy Company to announce that two of their candy products, Baby Ruth and Butterfinger, would be promoted on the show "Tales Of The Texas Rangers." Effective October 29, 1955, Curtiss would become a co-sponsor (along with General Mills) of "Tales Of The Texas Rangers" that starred Willard Parker as Jace Pearson and Harry Lauter as Pearson's side-kick Clay Morgan. The 33 1/2" x 22 3/4" interior fold-out is a picture of Jace Pearson, a Baby Ruth candy bar, "Tales Of The Texas Rangers," advising the show can be seen on CBS-TV, and the message "MR. MERCHANT: Please hang this poster in conspicuous location so your customers will be informed of program," The show ran for three years, ending in 1958. Some fold creases, a few small closed tears to the lower margins, else a very good copy of a cheaply made newspaper promotional.