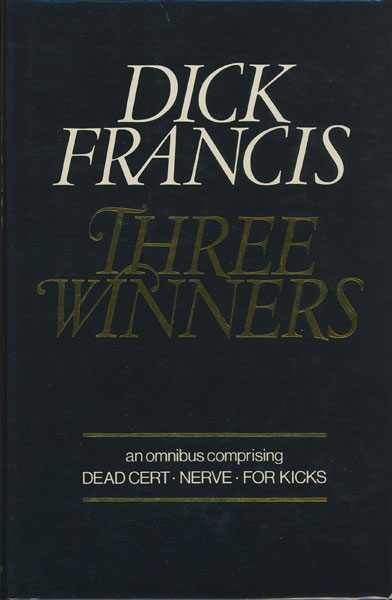 First edition. Signed.by the author on the title page. Fine in price-clipped dust jacket. An omnibus edition containing DEAD CERT, NERVE and FOR KICKS. In DEAD CERT, jockey Alan York anticipated losing the race to Bill Davidson and his great racehorse Admiral, but this time York was destined to win. Before Admiral jumped the final fence, Bill Davidson was dead. Alan knew that horse-racing is a dangerous sport, horses fall and jockeys get hurt, but Bill also realized that this was no accident. NERVE is the story of a struggling young jockey -- a misfit in a family of accomplished musicians -- who discovers that his losing streak is not the result of a lack of talent or lack of nerve, but by something much more sinister. Finally, in FOR KICKS Daniel Roke leaves his Australian stud farm to help look into an English horse-doping scandal. Soon enough Daniel learns that men who will give drugs to horses will do much worse to people!

Condor In The Stacks
by James Grady

The Blood Card
by Elly Griffiths

Portrait Of A Scoundrel.
by Eden. Phillpotts