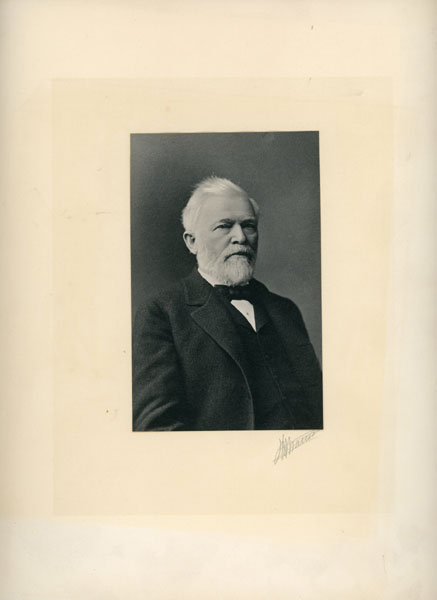 Other works by VARIOUS PHOTOGRAPHERS

Three photographs of the Johann Adam Roth family. The first picture is a 5 3/4" x 3 3/4" black and white photograph of Johann Adam Roth. The photo is attached to 12" x 10" manila cardboard. On the back of the cardboard states, "The original plate of this portrait is stored in the fire proof negative vault at the Studio of J.C. Strauss, Grand Avenue Corner Franklin, St. Louis. Duplicates in platinum or carbon can be had at any time." Neatly written at the bottom are the words, "Adam Roth. Grandfather of Elinor & Al. Roth was born in Hoesbach, near Aschaffenburg, Bayern, Germany, in 1826. He was the son of Johannes Adam Roth & Gertrude Seibert. He married Margaretha Arnold (daughter of Jacob Arnold & Catherine Becker) on 8 August 1854 at St. John's Church, St. Louis, St. Louis City, Missouri. The couple had twelve children: George, Julia, John, Richard, Caroline, William, Alfred, Sophia, Harriet, Kate, Florence and Beulah. Adam Roth was a well known grocer in St. Louis, owning the Adam Roth Grocery Company. The manila padding is lightly soiled but the photograph is fine. The second photograph is of an older woman, posed standing in her back yard...perhaps Margareta (?) This photo is sepia-toned and measures 10" x 7." This photo has been completely glued onto a stiff backing. Minor chipping to edges of photograph. The final photograph is a sepia-toned, 12" x 8" photograph of a young woman sitting at a desk with book in hand and appearing to be lost in thought. This particular photograph was taken by Gerhard Sister in St. Louis. Emme and Mayme Gerhard, the Gerhard Sisters, were among the first women photographers to establish a studio in St. Louis, Missouri, in 1903. On the back of the photograph is neatly written, "Anna Roth." 1" chip to top corner of photograph along with crease to top edge and minor wear to the extremities.

The Journal Of John Work, A Chief-Trader Of …
WILLIAM S. AND PAUL C. PHILLIPS LEWIS

A History Of Antelope County Nebraska, From Its …
A.J LEACH