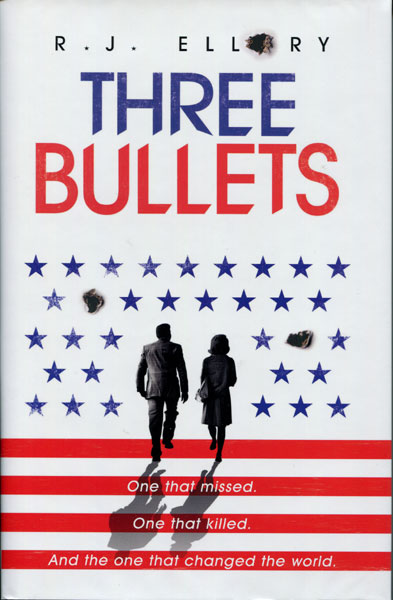 Other works by R. J ELLORY

First edition. Generically inscribed, lined and dated by the author. Fine in fine dust jacket. What if JFK wasn’t killed at Dallas? What might have happened during the full term of his presidency? Three Bullets breathes new life into the greatest controversy of 20th century American politics by approaching it from an entirely new angle which results in a gripping page-turner. With a deceptively simple sidestep, the author creates the backdrop for an inventive and original conspiracy thriller, one which takes actual events, people and places and subtly adjusts their significance and our interpretations. But the JFK conspiracy is just the backdrop to the core story, an intimate investigation into an apparent suicide. Freelance photographer Mitch struggles to accept that his childhood sweetheart – long since estranged – killed herself. Did she really take an overdose when her single-minded devotion to her scoop threatened to end her career? Motivated by loss and guilt, Mitch starts to pull together the pieces of an extremely sinister puzzle, attempting to redeem the wretched mistakes of his past.

The Man Who Wasn't Maigret - A Portrait …
PATRICK MARNHAM