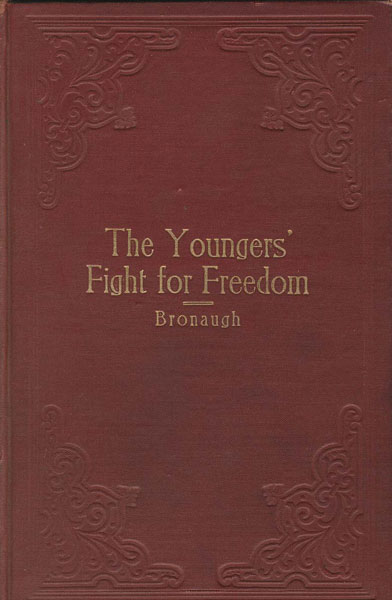 Other works by W. C. BRONAUGH

First edition. 8vo. Original blind-tooled maroon cloth with gilt stamping on front panel and spine, and with the crossed Union and Confederate flags in color on rear panel, 398 pp., frontis. [portrait], preface, introduction, plates, portraits. Adams 150 #20 says, "A book different from all others dealing with the James and Younger brothers, and reliable. The author spent twenty years of his life trying to get the Youngers pardoned from the Minnesota Penitentiary. From 1882 to 1902 he wrote letters, spent his own money and that raised by friends, traveled thousands of miles, and camped on the trail of governors, pardon boards, and wardens. He did not give up until the Youngers were released." William MacLeod Raine says, "At any rate the Youngers stayed with their wounded and were captured, the James brothers left them to fight their way out without them. To me it seems deplorable that men such as the James boys and Billy the Kid [Wyatt Earp is in an entirely different category] should be magnified into heroes by biographers." Very slightly cocked, with 2 small skuffs on rear panel, else a very good, tight copy.

Johnson County, Wyoming. The Home Of The Ideal …
THE CITY OF BUFFALO AND THE VILLAGE OF KAYCEE