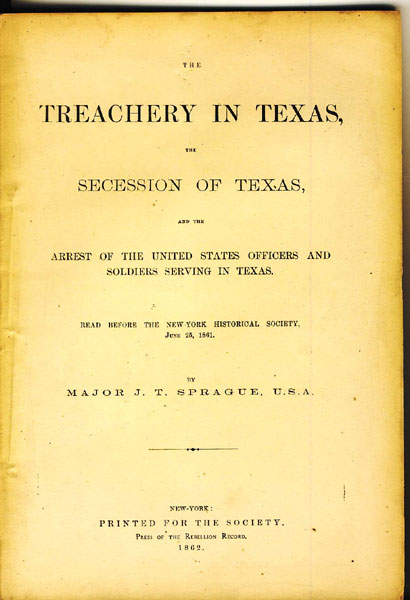 The Treachery In Texas, The Secession Of Texas, And The Arrest Of The United States Officers And Soldiers Serving In Texas. Read Before The New York Historical Society June 25, 1861

9 3/4" x 6 1/2" printed covers. Extracted from the minutes of the New York Historical Society meeting held June 25, 1861. Offers pages 109 - 142 plus covers. Political events, treason and bad faith in San Antonio, Texas. Sprague informs the committee that he is, "here to-night as a prisoner ... a prisoner of war in the hands of my own countrymen ... a prisoner on parole, made so by usurpation and the stern hand of military power and authority .... owing to himself , his companions, his countrymen and to history to state the unfortunate and disastrous events leading to this report. Arriving in San Antonio in 1849, citizens and soldiers stood side-by-side, fighting the pestilence that was desolating the land. After 10 years, "I found myself rudely expelled from the land so ardently cherished. Political sentiments had corrupted the hearts of well-tried citizens. The dark wing of rebellion hovered over the enterprising and prosperous state, poisoning the public mind, causing a bitter animosity to all those who espoused the cause of our common country. The combination of political events, treason and bad faith, culminated in friends turning to foes and soldiers finding themselves prisoners of war in the hands of their countrymen." Safeguards were put in place to insure the soldiers were moved safely out of the state. Report of the committee on public safety offering detailed arrangements for the safe departure of U.S. troops out of Texas. Tiny closed tear to rear panel, minimal chipping to extremities and splitting to spine ends. Very good.

Alaska. The Mentor. The Department Of Travel. December …
by Belmore Browne

The Story Of A Pioneer. A Brief History …
Florida East Coast Railway

Incident At San Augustine Springs. A Hearing For …
by Richard. Wadsworth