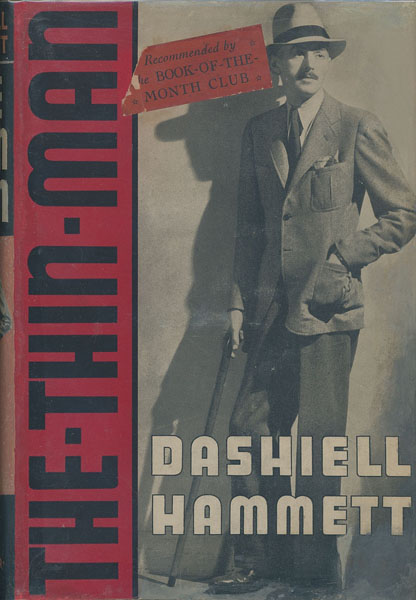 First edition. 8vo. Cloth is lightly mottled as is usually the case with this title, else near fine in dust jacket, with light professional restoration to spine ends and corners. Housed in a two tone quarter leather and cloth clamshell case with titles stamped in gold on the spine. A lawyer-friend asks Nick Charles to help find a killer and reintroduces him to the family of Richard Wynant, an eccentric inventor who disappeared from society 10 years prior. Wynant's former wife, Mimi, has remarried a European fortune hunter who turns out to be a spiteful former associate of her first husband and is bent on the ruin of Wynant's family fortune. Wynant's children, Dorothy and Gilbert, seem to have inherited the family aversion to straight talk. Nick tries to make sense of misinformation, false identities, far-fetched alibis, and, at the center of the confusion, the mystery of The Thin Man, Richard Wynant. Is he mad? Is he a killer? Or is he really an eccentric inventor protecting his discovery from intellectual theft? Basis for the 1934 film of the same name that starred William Powell, Myrna Loy, Maureen O'Sullivan, and others. The film was nominated for four Oscar awards.

The Day Of The Jackal.
by Frederick. Forsyth

The Spy Game.
by Georgina. Harding

The Genocides.
by Thomas M. Disch