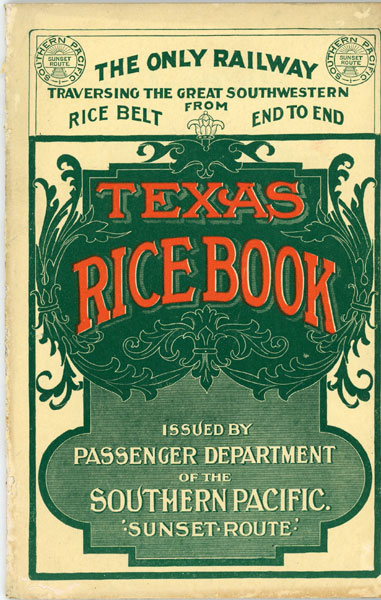 First edition. 8vo. Original 9" x 6" stapled, pictorial wrappers, 90 pp., illustrated, plates, map, advertising, index. Scarce photographically illustrated pamphlet promoting emigration to Texas for rice cultivation, published by the Southern Pacific at the turn of the 20th century. The booklet touts the geography and climate of East Texas as ideal for the growing of rice, and contains excerpts from newspapers and several articles by agricultural academics as well as numerous testimonials from farmers in the region to support those claims. Seven half tone illustrations depict rice fields, abundant harvests, rice mills, threshers, and several other related scenes. A "Map of the Southern Pacific and Connections" appears on the rear wrapper, with the "Rice Belt," which stretched from Brazos de Santiago (modern Brazos Island, across the bay from Port Isabel, Texas) to the Mississippi River Delta, highlighted in red. The front cover announces that the Southern Pacific is, "The only railway traversing the great southwestern rice belt from end to end." Advertisements from a number of Louisiana-based companies and Texas companies with offices in New Orleans, Orange, Beaumont, and Houston, etc. Some minor biopredation to lower edge of text and spine, else internally clean and bright and a quite serviceable copy in near very good condition.

All About The Hotels, Watering Place And Sea …
New York Central

Trails Of Yesterday.
by John. Bratt