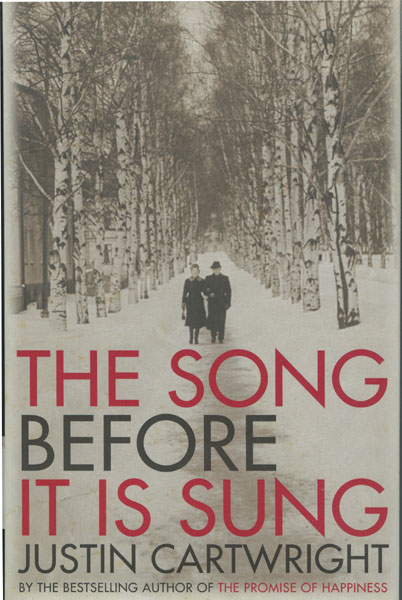 The Song Before It Is Sung.

Other works by JUSTIN CARTWRIGHT

First edition. Signed. Fine in dust jacket. On 20 July l944, Adolf Hitler narrowly escaped death when an assassin's bomb failed to kill him in his Eastern command, the Wolf's Lair. The conspirators were hunted down and hanged from meat-hooks, and their executions were filmed. Among them was Axel von Gottberg. Sixty years after his death, von Gottberg's close friend and now a legendary Oxford professor, Elya Mendel, leaves a legacy of papers and letters to a former student, Conrad Senior. Senior becomes obsessed with what they reveal, but as he becomes more and more involved with the past his own relationship with his wife Francine begins to fall apart. The friendship between Mendel and von Gottberg is fatally undermined by a romantic rivalry when two mysterious cousins, Rosamund and Elizabeth, enter their lives in a richly imagined pre-war Jerusalem. But it is finally destroyed when von Gottberg returns to Germany. Mendel, who is Jewish, believes him to be a Nazi, and alerts the Allies to his doubts about his friend, doubts which torment him after von Gottberg is garroted. Conrad is desperate to find a film Hitler had made of these appalling executions, for reasons he can't fully understand.

The Scent Of Death
ANDREW TAYLOR