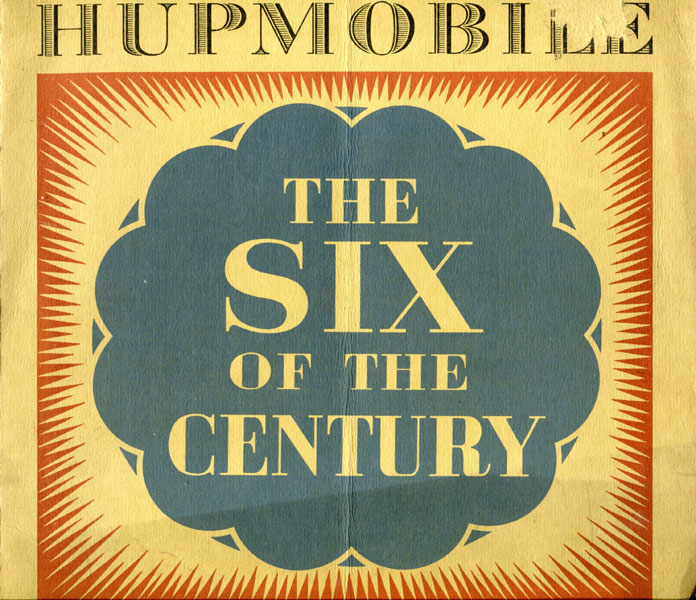 First edition. 10" x 10" color, stiff printed wrappers, 14 [2] pp., illustrated in color. Numerous color illustrations and plates and a brief listing of specifications. First edition of this exceedingly scarce dealer’s promotional catalogue detailing the introduction of the Hupmobile 6 whose increased sales, allowed Robert & Louis Hupp to make a more upscale automobile after purchasing Chandler Motor Car in 1928. This beautiful catalogue with Art Deco inspired illustrations includes the 2-passenger Cabriolet, 5-passenger Sedan, 2-passenger Sportster, 4-passenger coupe, and the 7-passenger Phaeton. Hupmobile was an automobile built from 1909 through 1939 by the Hupp Motor Car Company. The prototype was developed in 1908 and had its first successful run on November 8 with investors aboard for champagne at the Tuller Hotel a few blocks away. The company was incorporated in November of that year. The first Hupmobile model, the "Hupp 20" was introduced at the 1909 Detroit automobile show. It was an instant success. Henry Ford paid the Hupp 20 the ultimate compliment. "I recall looking at Bobby Hupp's roadster at the first show where it was exhibited and wondering whether we could ever build as good a small car for as little money." A small scrape to the top right corner of the front cover that affects the letters "L" and "E" in the word "Hupmobile," covers lightly soiled, and a faint vertical crease in the center (from at one time having been folded ), the interior is clean and bright for an overall very good copy.

Caminos Viejos. Tales Found In The History Of …
by Terry E Stephenson