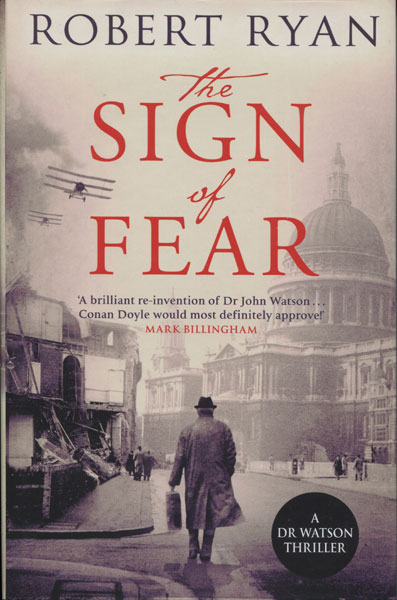 First edition. Signed by the author. As new, unread copy in dust jacket. Just in time for Sherlock's birthday comes a new Dr. Watson thriller from Robert Ryan. In The Sign of Fear it's Autumn, 1917. The skies above London hum with danger. And in the Channel enemies lie in wait. London is not the city that Dr John Watson and Sherlock Holmes once bestrode like giants. Terror has come from the sky and Londoners are scurrying underground in fear. Then a twin tragedy strikes Watson. An old friend, Staff Nurse Jennings, is on a boat-ambulance torpedoed in the Channel with no survivors. And his concert-going companion, Sir Gilbert Hardy, is kidnapped. Then comes the gruesome ransom demand, for Sir Gilbert and four others, which will involve terrible mutilation unless the demands are met. Help comes from an unlikely source when Watson finds himself face-to-face with his old ruthless adversary, the "She Wolf" Miss Pillbody. She makes him a remarkable offer and so an unlikely partnership is formed - the enemy spy and Sherlock Holmes's faithful companion, a detective duo which will eventually uncover a shocking case of state-sponsored murder and find Watson on board a German bomber, with a crew intent on setting London ablaze.

A Coffin For Two.
by Quintin. Jardine