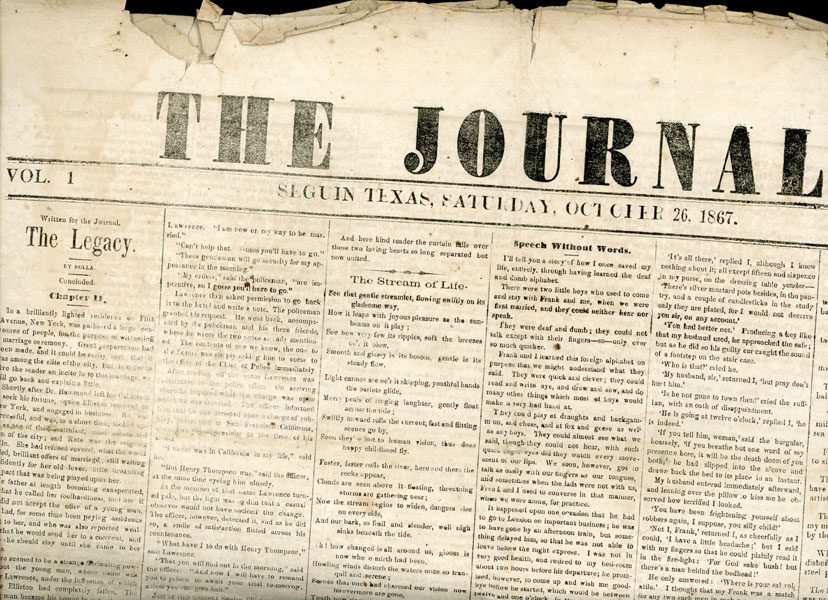 First edition. 24" x 17 1/2" newspaper. Vol. 1, No. 39, Saturday, October 26, 1867 issue. An exceedingly rare issue of the Seguin Journal, including much lively and diverse content from early in this town's history. One of the oldest towns in Texas, and located thirty-five miles northeast of San Antonio, Seguin was established in 1838, having seen its first white settlers arrive in 1833. The town was named after Col. Juan N. Seguin, who participated in the victory at San Jacinto, helped establish Texas independence, and later served as a Republic of Texas Senator as well as mayor of San Antonio. Seguin's earliest newspaper, the Texan Mercury (later the Seguin Mercury) dates back to 1853. The Seguin Journal, the town's second newspaper, came on the scene around 1856. When Sam Houston became a candidate for governor of Texas in 1857, the Journal supported his candidacy while the Mercury supported his opponent Hardin R. Runnels, who was ultimately elected as governor. The contents of these articles include the arrest of a black man for stealing a mule; Gen. Winfield S. Hancock's testimony on hostile Comanche and Platte Indians (A war of extermination is the only thing that will ever relieve us from the depredations of these fiends in human form"); Mexican dictator Santa Anna's sentencing to eight years of prison; recorded deaths from the yellow fever epidemic; an attack on the El Paso mail party (that included Buffalo Soldiers of the 9th Cavalry) by native Americans ("the dead bodies were not scalped"); a stabbing incident; escaped convicts; the arrival of a live gorilla at Barnum's Museum in New York; "our sister city" San Antonio's railroad prospects; literature and poetry ("Josh Billings' Essa on o Swine"); British Trade with the United States ("it appears that the United States, notwithstanding the terrible ravages of the late Civil War, is still the best customer of England"); information on crops; an advertisement for booksellers Bielock & Co. ("cheapest book house in the South"); European news and more. The death of Col. George Wilkins Kendall (1809-1867) is also recorded; Kendall was a journalist, war correspondent, and pioneer Texas sheepman, regarded as the Father of the Texas sheep industry, and for whom Kendall County, Texas is named. During the Republic era, Seguin citizens petitioned to have the area made a county; instead the Congress of the Republic responded by establishing Guadalupe County in 1842. Germans began emigrating into the area during the 1840's, leading to the improvement of farming methods and an increase in trade. The foundation for black education in Seguin and throughout Guadalupe County was in large part the work of black Baptists -- the first schools for blacks being formed in Methodist and Baptist churches. Seguin had Methodist, Presbyterian, Episcopalian, Catholic, and Baptist congregations. During the Civil War, Seguin residents were growing cotton, corn, and peanuts and raising hogs and cattle. After the war Seguin was occupied for a time by Union soldiers. No copies of any issue of The Journal are recorded in OCLC. Fading to parts of the text, general wear to the extremities, a few tiny punctures, else a good copy that can withstand regular, controlled usage.

The Jewish Pioneers Of Tombstone And Arizona Territory.
by Ron W. Fischer

The Flavor Of Texas
by J. Frank Dobie