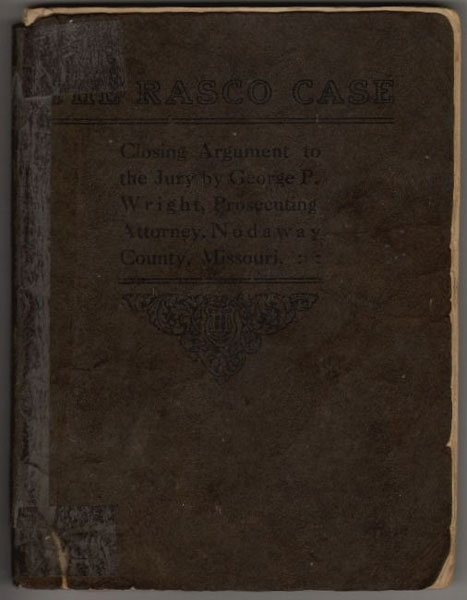 First edition. 4 1/4" x 6" original printed wrappers, 93 pp, with three illustrations from photographs. Old tape repairs to title page and spine, light soiling to some page edges, general handling wear, one marginal notation in ink. Two original newspaper classified ads seeking photographs of Hez Rasco and his victims taped to title page. Overall, a fair to good copy of this apparently unrecorded item from a notorious Missouri murder case. The defendant, Hezekiah “Hez” Rasco, was a repeat offender, having been convicted of a brutal rape and murder in 1896, at the age of just 16. On November 19, 1910, after a long day's work, Hez cleaned himself up and went to Guilford in search of some entertainment. There he met up with two acquaintances, Oda Hubbell and Charles Wallace. The men went to an empty boxcar parked on an unused side track at the Guilford depot and began to play poker. Eventually Hez and Oda were left to play until dawn. Hez's losses to Oda during the course of the game resulted in an argument the next morning. Oda refused to acquiesce to Hez's demand to continue playing. Instead, Oda went home that Sunday morning to be with his family. Hez went looking for a gun. By seven o'clock that Sunday evening, the Hubbell family was dead. By ten o'clock, their home was ablaze. Within twelve hours, Hez Rasco, age 30, was under arrest for their murders. Although the defense argued that no murder had occurred, good investigative work - and the lengthy closing argument transcribed herein - convinced the jury otherwise. Rasco was hanged for the crime in March 1912. Not found in OCLC.

A Plot Of Earth.
by J. Frank. Dobie

The Red River Valley, Then And Now. Stories …
by A.W. Neville

A Day At Wall Lake
by Charles Sumner Nichols