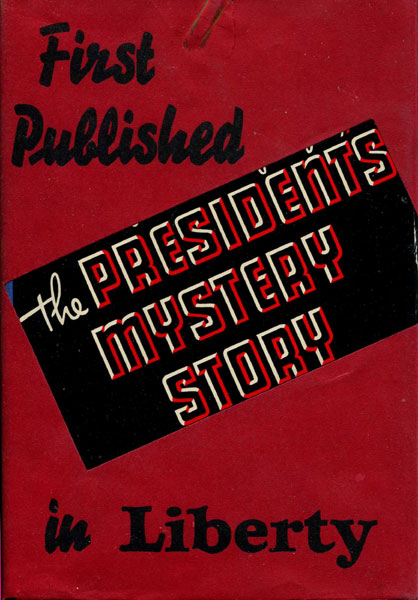 A mystery plot propounded by the president is written as a round-robin novel by Rupert Hughes, Samuel Hopkins Adams, Anthony Abbot, Rita Weiman, S.S. Van Dine, and John Erskine. Signed on the title page: Compliments of Wm. S. Carlisle (presumably the editor or publisher of F&R). A leaf describing the novel and its appearance in Liberty Magazine was affixed to the front endpaper and has come loose but is present. A fine copy in dust jacket, which has a small indentation where a paper clip had been but is otherwise fine and bright. With a wrap-around jacket, that has been placed over the original fine dust jacket, stating it is an advance copy and "First Published." "How can a man disappear with five million dollars in any negotiable form and not be traced? For years I have tried to answer that problem. In every method suggested I have been able to find a flaw. The more you consider the question, the more difficult it becomes. Now---can you tell me how it can be done?" Thus said President Franklin Delano Roosevelt to his good friend Fulton Oursler, then editor of Liberty Magazine. "Suppose," replied Oursler, "that we were to ask the leading writers of the United States to solve this problem. Why could they not collaborate on a mystery story in which your problem is dramatized in the person of a man faced with this predicament?" The President's famous, joyous laugh responded. "That would be fun! Go ahead. See what you can all do with it."

Drink To Yesterday.
by Manning Coles

The Sinking Admiral. By Certain Members Of The …
Simon Brett [Edited By]

The Problem Of The Missing Miss.
by Roberta. Rogow