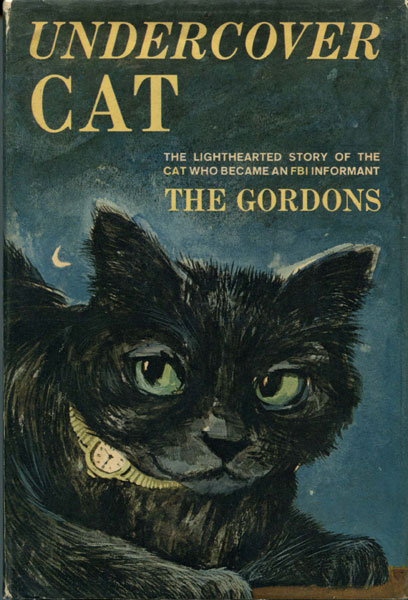 GORDONS, THE [MILDRED AND GORDON GORDON].

Other works by GORDONS, THE .

First edition. Signed and inscribed in ink on the front fly leaf by the authors, the Gordons to film producer Ron Miller, inscribed "For Ron, With all our admiration for what you've done on the screen and every good wish as betwixt friends. Que vaya con Dios! Milly and Gordon alias 'The Gordons.' We still think you should play Zeke. Me too (ink stamp of a cat's paw print)." Ron Miller produced the 1965 Disney film based upon UNDERCOVER CAT, starring Hayley Mills, Roddy McDowell, and Elsa Lanchester. Informant X-14 was the key to the FBI's last desperate hope of locating and apprehending two bank robbers before the fugitives could dispose of the teller they'd kidnapped as getaway insurance. But Informant X-14 wasn't talking, he was purring. Damn Cat, a twenty-five pound feline member of the Randall household, affectionately known as D. C., had become an official FBI informant after returning home from one of his nocturnal prowls with the kidnapped teller's wristwatch around his neck. A very good, tight copy in dust jacket with light wear to the spine ends and corners and two tiny closed tears to the top edge of the rear panel. On the rear panel of the dust jacket is a photograph of The Gordons, and above the photograph they have inked the words "Wanted: Dead or Alive." A unique copy that was made into a delightful Disney movie.

An Unsuitable Job For A Woman.
P. D. JAMES