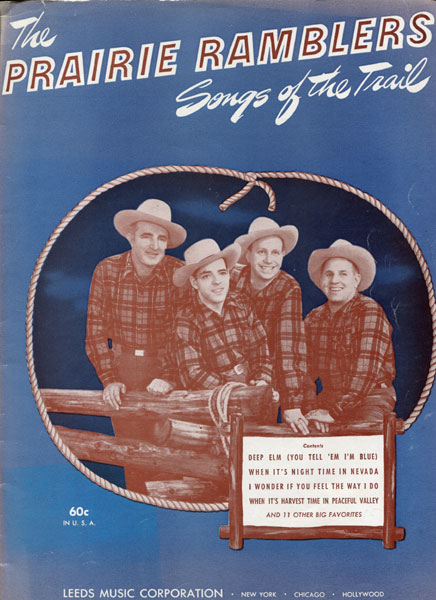 The Prairie Ramblers Songs Of The Trail

by The Prairie Ramblers

First edition. Quarto. 12" x 9" Color pictorial wrappers, 48 pp., illustrated from photographs (front cover and inside and back cover). Contains words and music to 15 cowboy songs written by members of this group. Titles include: I'd Druther Be Most Anything I Ain't; LazyWoman; Mojave Moon; When It's Night Time In Nevada; Where The Rio Grande Winds Along;and ten more. The Prairie Ramblers were heard most widely over Chicago's WLS and as backers for Gene Autry on the National Barn Dance. Patsy Montana of Arkansas joined the group in 1934, and they all moved to WOR-New York, began recording for American Records in 1935, &c. Inside the cover of this songbook is a foreword on the group in 1941: Salty Holmes, Chick Hurt, Jack Taylor and Alan Crockett. The four are shown on the cover. Rear cover features a full-page advertisement for the songs sung by Burl Ives. Lightly sunned along spine and top and bottom edges, else a very good clean copy.