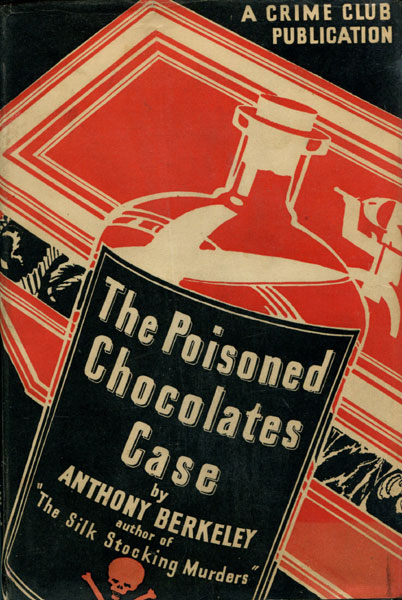 First U.S. edition. Light water stain to toe of spine else very good in bright dust jacket with minor wear to the head of spine. "After arriving at his London Club at 10:30 am precisely, which he has been doing every morning for many years, Sir Eustace Pennefather, a known womanizer whose divorce from his current wife is pending, receives a complimentary box of chocolates through the post. Disapproving of such modern marketing techniques, Sir Eustace is about to throw away the chocolates but changes his mind when he learns that Graham Bendix, another member of the London Club whom he hardly knows, has lost a bet with his wife Joan and now owes her a box of chocolates. Bendix takes the box home and, after lunch, tries out the new confectionery together with his wife. A few hours later Joan Bendix is dead. Graham, who ate far less of the chocolate than Joan, becomes violently ill, is hospitalized, but recovers. The police can establish a few facts beyond any doubt: that the parcel was mailed the previous evening near The Strand; that the poison that was injected into each of the chocolates is nitrobenzene; and that the accompanying letter was typewritten on a piece of stationery from the manufacturers of the chocolates but not composed or sent by them. The police investigation quickly determines that the intended victim was Sir Eustace and conclude that the sender must have been some maniac or a fanatic trying to rid society of one of its most immoral members." A group of armchair detectives, who have founded the "Crimes Circle," formulate theories on the murder. Each of the six members, including their president, Berkeley's amateur sleuth Roger Sheringham, arrives at an altogether different solution as to the motive and the identity of the perpetrator, and also applies different methods of detection. As at least six plausible explanations of what really happened are put forward one after the other, the reader—just like the members of the Crimes Circle themselves—is kept guessing right up to the final pages of the book. An exceptional copy of a scarce and important Golden Age mystery and a Haycraft-Queen Cornerstone title.

The Little House
by Philippa Gregory

A Taste For Death.
by Peter. O'Donnell