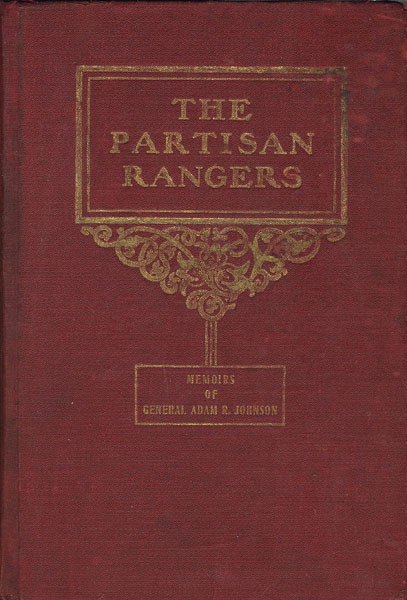 The Partisan Rangers Of The Confederate States Army.

First edition. 8vo. Original maroon cloth, gold stamping on front cover and spine, decorated endpapers, xii [2], 476 pp., frontis. [portrait of Brigadier General Adam R. Johnson], preface, illustrated, plates, portraits. Jenkins' Basic Texas Books 108 says, "This is one of the most interesting first-hand narratives of Texas Indian fighting, stagecoaching, and Confederate cavalry operations. Johnson fought Indians in Texas in the 1850s, was a driver for the Butterfield Overland Stage in Texas, and surveyed a vast amount of virgin territory in West Texas. In the Civil War his famed Texas Partisan Rangers cavalry unit fought under Nathan Bedford Forrest and John Hunt Morgan. Wounded and blinded, he was imprisoned in Fort Warren. After the war, in spite of his blindness, he was so active in pioneering business ventures in West Texas that his home of Marble Falls became known as 'the blind man's town." Graff 2213 says, "The story of a very brave and daring man. His Indian warfare experiences in Texas in the late 1850s, when he was connected with the Butterfield Stage outfit and also when as a surveyor he surveyed much virgin territory, are almost beyond belief. The same or more can be said of his Civil War service in Kentucky as a Partisan Ranger." Original maroon cloth with new spine and original spine laid down on top, cosmetic restoration to corners and inner hinges professionally strengthened, else very good copy. HOWES J122. COULTER 257. GRAFF 2213. BTB 108. NEVINS I 113.

Original Business Card Of J.L. Hubbell For The …
by J. L. Hubbell

Dreams Come True For Cowboys, Too! The Remarkable …
J. G. Harcourt.. Huckle [As Told To]