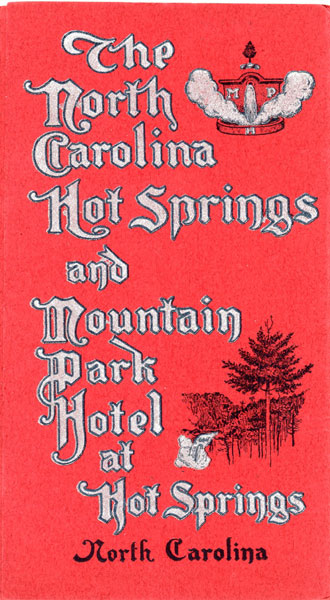 First edition. 16mo. 16 x 9 cm [6 1/2" x 3 1/2"] original red bi-fold pictorial wrappers, printed in black with lettering and small illustrations hand-colored in silver, illustrated with nine full-page and several in-text photographs. A charming pamphlet advertising one of the premier Southern resorts of its day. The 200-room Mountain Park Hotel offered a grand ballroom, billiards, bowling, tennis, riding stables, and a golf course. The Wana-Luna Golf Club (organized 1895, incorporated 1898) was one of the first in the region and employed a "competent professional golf instructor." Guests could take the hot mineral springs in a modern bathhouse that offered massage. The health benefits of the waters (ranging in temperature from 96 to 110 degrees) are touted here, an analysis of their mineral content is provided (by C.F. Chandler and C.E. Pellew), and notice is given of a resident doctor under the direction of prominent Asheville physician, Samuel Westray Battle. However, this was no sanitarium, and the pamphlet announces that "no consumptives will be received." Above all, the Mountain Park Hotel was a "pleasure resort," with social opportunities including dining, card parties, dancing, and music recitals. Guests traveled from throughout the East to visit Hot Springs, which was served directly by the Southern Railway. The pamphlet details the railroad connections from major cities and provides a list of travel agents. Illustrations include a bird's-eye view of the resort, various views of the hotel and grounds, the ballroom, the bathhouse, and the railway. The Mountain Park Hotel was built in 1886 by an investment group, The Southern Improvement Co. In 1891, they sold it to Col. James Rumbaugh, a leading figure in the town and the owner of an earlier hotel in this location. From January to June 1904, the hotel was managed by Edgar B. Moore, here identified as the proprietor, who also ran the Kenilworth Inn in Asheville and the Gladstone on Narragansett Pier, and who leased part of the Biltmore Estate grounds for a hunting and fishing club. An ad for the Kenilworth Inn appears on the final page of this pamphlet. Moore’s brief tenure as manager of the Mountain Park Hotel ended in a nationally publicized controversy. On June 17, John C. Rumbough, acting as agent for his parents, took possession of the hotel, citing the failure of Moore to comply with certain terms of his lease (Rumbough alleged he had not maintained the hotel furnishings and grounds in good order). According to Moore, he was threatened by armed men and unlawfully arrested, which lead to stories such as “Armed Men in Possession of Hotel” (New York Tribune, July 5) and “War of Hotel Men” (New York Times, July 6) and to Moore suing Rumbough for $50,000 for damages and false arrest. Rumbough denied Moore’s allegations and characterized his actions as peaceful and lawful. He managed the hotel briefly before finding another proprietor. The Mountain Park Hotel was destroyed by fire in 1920 and never rebuilt. Remnants of the foundation can be seen on the grounds of the present-day resort. Modest wear to the right upper corner and light creasing to the lower edge of the first leaf, else a lovely fine copy and an important North Carolina landmark.

Then And Now, Here And Around Shakespeare
by Rita Hill