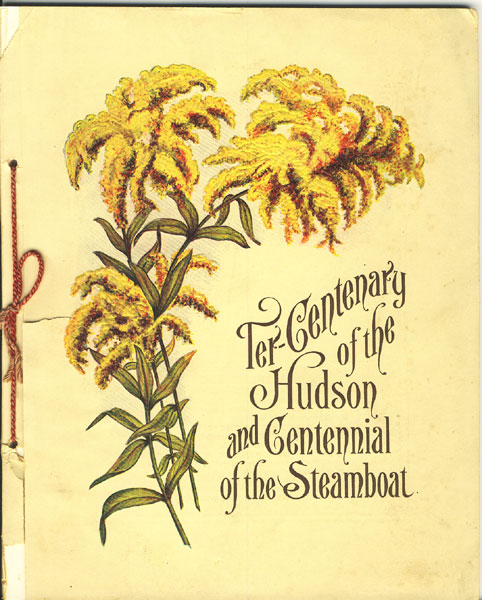 Ter-Centenary Of The Hudson And Centennial Of The Steamboat

9 7/8" x 7 3/4" in manila covers embossed with a color illustration of a plant, bound with a faded red cord. 66 pp., illustrated advertisement inside front cover, title page illustrated with black-and-white drawing of The Half Moon, illustrated advertisement inside back cover, illustrated throughout in black-and-white, two-page centerfold illustration of the Catskill Mountains. "The Hudson-Fulton Celebration September 25 to October 9, 1909 , H2Yi Hendrick Hudson. Robert Fulton. The fall of 1909 will witness the striking and important joint celebration of Hendrick Hudsons discovery of the Hudson, three hundred years ago, and of Robert Fultons epoch making experiment in steam navigation in 1807. Imposing observances, religious, musical, literary, historical, military and naval, will mark the occasion and the whole Hudson valley will participate. On Saturday, September 25, the Half Moon and the Cler-Mont are to be officially received in New York harbor, and on the evening of that date there is to be a grand night pageant and illumination off Riverside Drive, which will probably be the greatest event of its kind in the history of New York City. An historical parade will mark Tuesday, September 2 Sth, and a military, Thursday, September 30 th, both in New York City. A facsimile of the Half Moon, Hudsons ship, and of the Cler-Mont, Fulton ssteamboat, will be a part of the great naval parade which will start from New York, Friday, October 1 st, and pass on up the river by slow stages, till Troy is reached, Saturday, October 9 th. No such celebration has ever been seen in America before and the thousands of visitors will be amply entertained and greatly edified." Includes much historical information, some poetry, and a description of the Hudson-Fulton Celebration in 1909. Wrappers lightly soiled with wear to the extremities. Chip missing from top of spine, chip to top inside corner edge of front wrapper as well as some splitting and chipping to bottom spine and edge and 1" closed tear to center edge at spine.