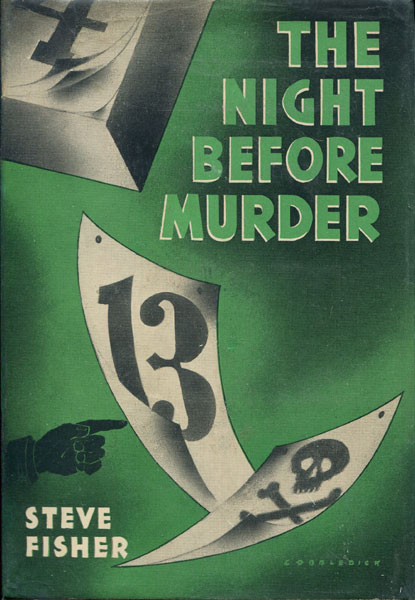 The Night Before Murder.

Other works by STEVE FISHER

First edition. Author's second mystery. Fine bright copy in a bright, unfaded dust jacket with some minor restoration at the edges. An aging actress decides to commit murder and with great care she selects her victim. But during the night before murder an unexpected circumstance interfered with her diabolical plan. Fisher was the author of "I Wake Up Screaming," "Winter Kill" and other good crime novels before going to Hollywood, where from the '40's to the early '70's he was one of the most prolific screenwriters of that period. He specialized in crime, westerns, and war movies and often collaborated with others, such as Albert Maltz, Frank Gruber, W. R. Burnett, and others. Some of his most memorable movies were "Destination Tokyo," "Lady In The Lake," "Song of the Thin Man," "Tokyo Joe," "I Wouldn't Be In Your Shoes," and "City That Never Sleeps." In the late '70's he wrote more than 200 scripts for "Starsky & Hutch," "McMillan & Wife," "Barnaby Jones," and other TV series.

And None Shall Sleep.
PRISCILLA MASTERS