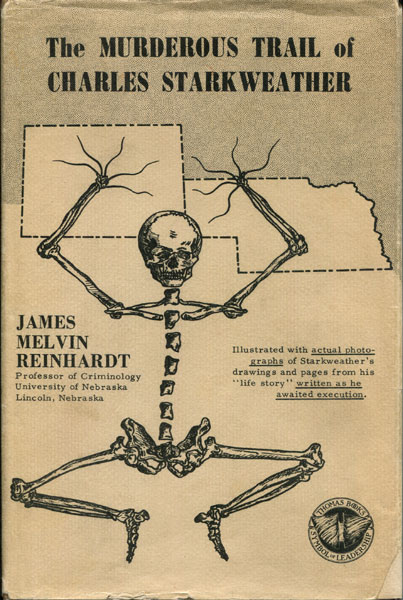 The Murderous Trail Of Charles Starkweather

First edition. Signed by the author on the title page and with a presentation inscription by the author on the front fly leaf. Cloth, xii [2], 151 pp., frontispiece (photograph of Richard Starkweather), preface, acknowledgments, illustrated, index. Illustrated with actual photographs of Starkweather's drawings and pages from his "life story" written as he awaited execution. Charles Starkweather was an American spree killer who murdered eleven people in Nebraska and Wyoming between December 1957 and January 1958, when he was just 19 years old. He killed ten of his victims between January 21 and January 29, 1958, the date of his arrest. During his spree Starkweather was accompanied by his 14-year-old girlfriend, Caril Ann Fugate. Both Starkweather and Fugate were convicted on charges for their parts in the homicides; Starkweather was sentenced to death and executed seventeen months after the events. Fugate served seventeen years in prison, gaining release in 1976. Starkweather's electrocution by electric chair in 1959 was the last execution in Nebraska until 1994. His grizzly murders have since been remembered through music, film and books. Fine in dust jacket with light wear to the spine ends, corners, and extremities. An elusive title and a chilling story.

Crown King And The Southern Bradshaws: A Complete …
by Bruce M. Wilson

Pioneer Days In Arizona. From The Spanish Occupation …
by Frank C. Lockwood