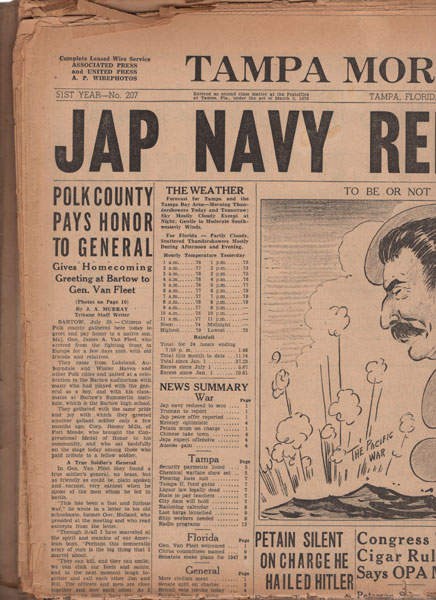 Engaging Annotated Photograph Album Recording A Marine Corps Reservist's Time On Occupied Okinawa After The Successful U. S. Invasion Towards The End Of World War Ii

by An American Marine

First edition. Oblong octavo, black leatherette, string-tied photograph album, 101 silver gelatin photographs with most being 4 1/4" x 5 1/4," some smaller. An interesting collection of vernacular images from World War II Okinawa, documenting an American Marine Corps reservist’s time on the Japanese island after the successful U.S. invasion in the spring and summer of 1945. He is identified simply as “Ronnie” in several photographs. The album was likely assembled by Ronnie’s wife or girlfriend, as the first item is annotated “A Christmas card from my honey” and includes a greeting in manuscript from the soldier on the verso. Eighty-nine photos emanate from Okinawa, four from Camp Pendleton, and eight from Camp Lejeune in Kinston, N.C. and on the soldier’s furlough at home (likely Florida). The photographs of Okinawa feature a wide variety of interesting subjects, including island views, abandoned Japanese bunkers, tombs, Shinto shrines, damaged Japanese armaments, “Korean teahouse girls – the type used by the Japanese armies for entertainment purposes,” Japanese natives washing clothes in the river, views of villages, “A native barber and his victim in the village of Ishikawa in northern Okinawa,” “Native family of three enroute to a detention camp,” “Jap dugout in the ‘Suicide Cliff ’ area,” “Japanese school children and teachers,” “Native women bathing,” “Remains of Japanese ‘Betty’ pilot, Yontan Airstrip,” marine and army cemeteries, “Ernie Pyle’s grave,” “Spot where Lt. Gen. Simon Bolivar Buckner was killed –June 18, 1945,” and many more. The U.S. invasion of Okinawa began in April 1945 and lasted eighty-two days, ending on June 22. Immediately, the island became an important staging area for the planning of the U.S. invasion of mainland Japan. Ultimately the invasion was not necessary after the atomic bombings of Hiroshima and Nagasaki in early August. Also taped-in are two Japanese yen bills and eight magazine excerpts featuring Okinawa scenes. Laid-in are three Florida newspapers detailing the U.S. Navy's invasion of Japan. A rare view of occupied Okinawa from an American Marine ... itself a rare thing, as most albums of this type come from Army boys. Minor wear to the covers, else a very good copy.

Ter-Centenary Of The Hudson And Centennial Of The …