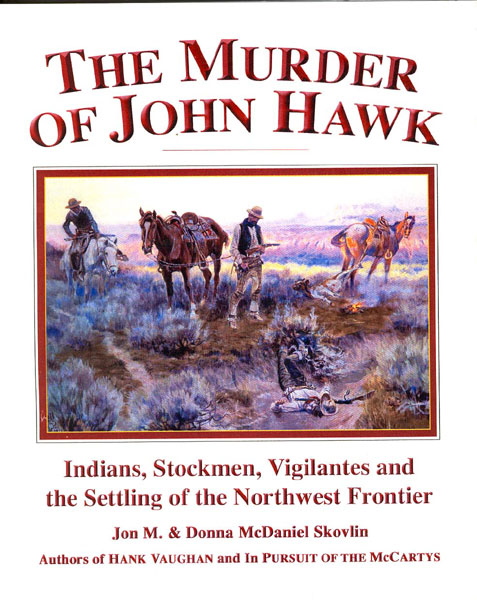 The Murder Of John Hawk. Indians, Stockmen, Vigilantes And The Settling Of The Northwest Frontier

First edition. Colored pictorial wrappers. Signed by both authors. Notes, dedication, acknowledgement, contents, prologue, epilogue, bibliography, index. John Hawk was considered by many to be the surliest, most unpleasant man they’d ever met. He’d boldly gone deep into Nez Perce tribal lands, staked a claim and started ranching on Prairie Creek. Rumors that Hawk was rustling cattle started fairly quickly. His father-in-law, along with several other neighbors, went so far as to file theft charges against Hawk in 1877. Hawk was acquitted of all charges in that case, but most other cattlemen in the area didn't for a minute believe he was innocent. After the trial, hostility toward Hawk became open and blatant, and he responded in kind. Hawk could have reassured the cattlemen that he was not, in fact, a rustler, but this he refused to do, apparently on the theory that he shouldn't have to. That stubbornness would eventually kill him. On a cold, clear, moonlit night by the Lostine River in 1881, while asleep in his bedroll, John Hawk, who was only 31 years old, was shot dead by a group of vigilantes. Creasing to page corners else very good.

How The Law Got Into The Chaparral: Conversations …
by Frederic And John H. Jenkins (Editor) Remington

Letter From The Secretary Of The Interior, In …
by C Delano