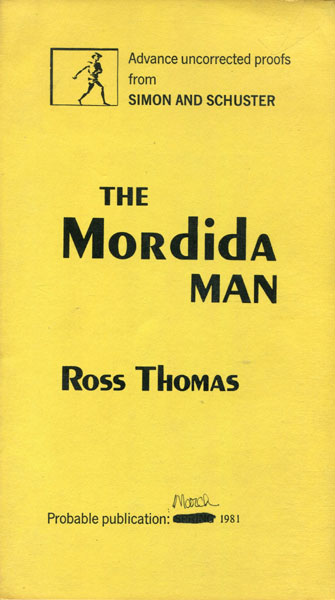 First edition. Inscribed by the author to a noted Mystery Bookseller. Uncorrected proofs. These proofs were produced at a time when proofs were used for editiorial purposes. There perhaps were no more than 10 copies produced. Fine in printed wrappers. When a freedom-fighter friend to Libyan dictator, Mourabet, is kidnapped, Mourabet immediately assumes that the CIA is responsible and instructs his Libyan delegation that is in Los Angeles and is being hosted be Bingo McKay, the President's brother, to retaliate by kidnapping Bingo. In Washington, the President receives evidence that Bingo has indeed been kidnapped .... his ear! Chubb Dunjee, ex-congressman, ex-UN representative, expatriate and bribery, is hired by the President to find his brother.

The Ceiling Of Hell.
by Warren. Murphy

The Case Of The Haunted Husband
by Erle Stanley Gardner