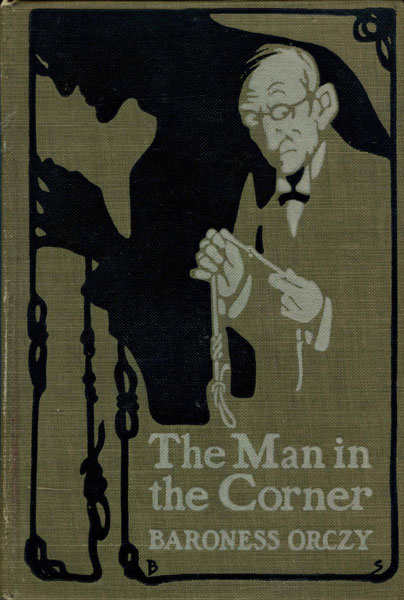 The Man In The Corner.

First U. S. edition. Published in the U. K. earlier in 1909 using the title THE OLD MAN IN THE CORNER. Very good in pictorial cloth. Illustrated by H. M. Brock. 20th Century Crime and Mystery Writers, Third Edition p. 824 says "When Baroness Orczy was a struggling young author in London, before the success of THE SCARLET PIMPERNEL in play and novel form, the editor of the Pearson magazines suggested that she profit from the popularity of Sherlock Holmes by writing a series of detective stories. The result was THE OLD MAN IN THE CORNER, one of the great figures in the early detective story. The Old Man (Bill Owen) sits in a cheap restaurant frequented by journalists and plays with a bit of string, which he ties into elaborate knots as he talks. Addressing himself to Polly Burton, a young newspaperwoman with whom he has struck up a slight acquaintance, he focuses upon crimes mentioned in the newspapers. He summarizes the circumstances, describes the personalities, and then sneeringly provides the correct solution which has evaded the police." Thirty six short stories. A Haycraft/Queen Cornerstone mystery title and Queens Quorum title # 41.

A Tournament Of Murders.
by P.C. Doherty

Murder Without Tears.
by Leonard. Lupton