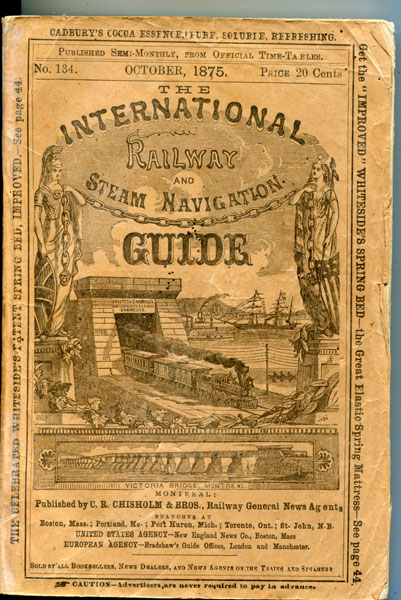 No. 134. October, 1875. Published Semi-Monthly, From Official Time-Tables. 7 7/8" x 5 1/4" in light orange pictorial wrappers. 252 pp. Advertisements. Illustrations. Maps. A complete listing of timetables for various railroads and steamship lines. System maps for various railroads throughout the book as well as a 1-page street map of Montreal and a 2-page street map of Boston. General Time Table Index; Index to Steamship Lines; Index to Advertisements; Index to Railway Stations; Calendar for 1875; general railway information which includes railroad current events such as the naming of new General Manager, The Central Pacific Report which shows a profit, information about the tunnel project for the old Michigan and Central-Great Western, etc.; a listing of hints to travelers; a hotel guide; a listing of telegraph stations throughout the U.S. Wear to corners of pages along with light soiling as well as light soiling and wear to corners and edges along with neatly reinforced spine with cellophane tape. Interior tight.

Some Fatal Accidents In The Atlantic, Baltic, Champion, …
by Clarence J. Monette