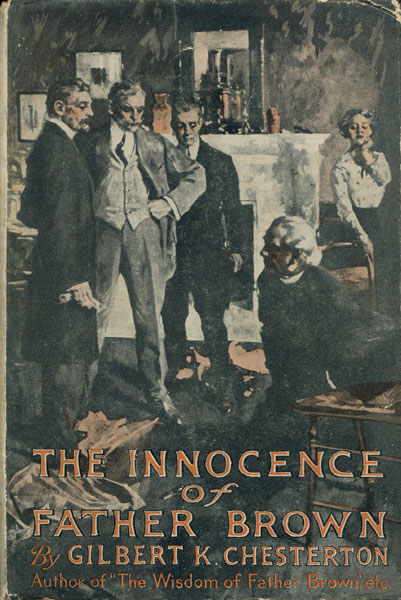 The Innocence Of Father Brown.

Other works by G. K. CHESTERTON

First U. S.edition thus.This edition is preceded in the U. S. by the 1911 edition published by John Lane. Red cloth in fine condition with titles stamped in black ink on the front cover and spine, in lightly rubbed dust jacket with light wear to the spine ends and corners and a few shallow nicks to the top edge of the rear panel, one of which is mended with a small piece of cellophane tape on the verso. First appearance of Father Brown. Queen's Quorum 47 says, "The miracle-book of 1911 introduced Father Brown to an eternally grateful public. The position of Father Brown has been expressed pertinently by Barnaby Ross who wrote, 'If there is one character in detective fiction who possesses the innocence and wisdom to sit beside the immortal Holmes, it is that apotheosis of incredulity, Father Brown.' You will find in this book all the wondrous qualities of Chesterton's genius: his extraordinary cleverness of plot, his unique style, and the brilliant use of paradox both in language and in the counterplay of the supernatural and the natural. In a letter to a famous aficionado we once wrote that Father Brown is 'one of the three greatest detective characters ever invented." 1001 Midnights say, "A cornerstone volume, .... can lay claim to greatness on two counts: It introduced the priest detective whose adventures are still popular three-quarters of a century later, and it contains more classic short stories than almost any other mystery collection before or since." An important book.

The Man Who Could Not Shudder.
JOHN DICKSON CARR