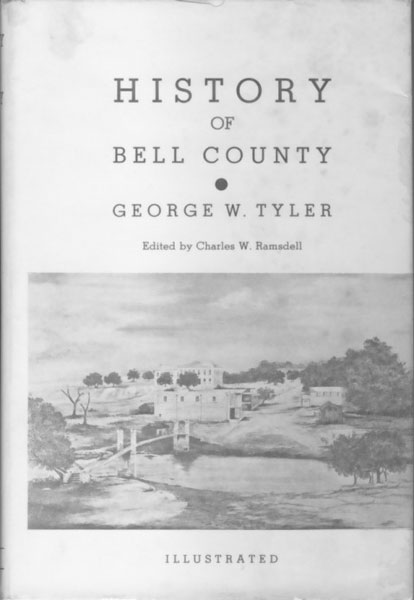 The History Of Bell County.

Edited by Charles W. Ramsdell. First edition. 8vo. Red cloth, gold stamping on front cover and spine, xxiii [3] [map], 425 pp., frontis. [portrait], author's preface, footnotes, illustrated, maps, index. A well-written, readable account of the economic, political, educational, and social development of Bell County, located in central Texas, whose chief cities are Temple and Belton, the latter the county seat. Page ix says the following, "At [the author's death] the writing was incomplete and some was in the form of rough notes. It was left to the editor .... to revise and condense the manuscript, and, in a few instances, to fill out the narrative." Six Guns 2256 says "Scarce." "Contains some material on Sam Bass, Bill Longley, and other Texas outlaws." Lightly foxed along top edge and fore-edge, staining to front and rear paste-down sheets due to binder's glue discoloration, else near fine in a moderately rubbed and lightly foxed dust jacket with light wear to the extremities. SIX GUNS 2256.

Log Of An Arizona Trail Blazer.
by John A. Rockfellow

The Library Of Fernando Colon. Extract From An …
by Henry R Wagner